Thomas-Jacob Publishing has released the audiobook edition of book three in Melinda Clayton’s “Tennessee Delta Series” Child of Sorrow. The paperback and e-book editions were released in June; the audio edition is narrated by Brett Leach. The novel is also available in hardcover. 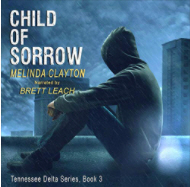 When fourteen-year-old foster child Johnathan Thomas Woods is suspected of murder, an old letter and a tacky billboard advertisement lead him to the office of attorney Brian Stone. Recognizing the sense of hopelessness lurking under John’s angry façade, Stone is soon convinced of his innocence. When John offers up his lawn-mowing money as payment, Stone realizes this is a case he can’t refuse.

In the face of overwhelming evidence assembled by the prosecution, Stone and his team find themselves in a race against time to save an angry boy who’s experienced more than his fair share of betrayal, a boy who more often than not doesn’t seem interested in saving himself.

The cover link above takes you to the Audible listing page. You can also find the audiobook listed on Amazon here. The story will keep you occupied while you’re in quarantine, lockdown, or simply relaxing at home after a busy day.