As I re-read John Grisham’s novel Gray Mountain about a law firm that lays off maybe a thousand workers during a financial crisis, I couldn’t help but remember my layoff from Big Ass Software, Inc. Several days after 9/11, our department manager assured all of us that the company and our jobs were secure. 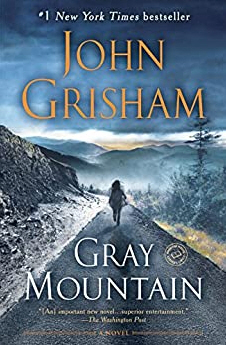 I was writing online documentation for a printing application that had so many parts to it that it looked like the documentation would never be finished. My salary was high enough that my wife and I could live on half of it and save half of it.

In spite of the promises, our entire division was laid off. There was a chance I could remain employed if I wanted to move to Pennsylvania. I didn’t.

In Grisham’s novel, the laid-off employees are considered furloughed with a chance of returning after a year if they agree to work at no salary for a nonprofit organization. I might have accepted that option if Big Ass Software had made such an offer. Samantha, Grisham’s protagonist ends up working gratis for a legal aid group in Appalachia where–since this is a thriller–a lot of bad stuff starts happening.

Fortunately, I never ended up in a mystery/thriller lifestyle like that. I do think, though, that laws should make it more difficult for companies to layoff employees over fifty for the simple reason that almost nobody will hire them. I had multiple interviews, but no viable offers. Why? Age discrimination.

If you’re on the verge of being considered elderly (over 50) keep your job or, possibly, go to work fighting BIG COAL in Appalachia.