“They” say that Scots and those of Scots ancestry are cheap. “They” might be right since we’re part of that group who spends both sides of every penny.

Bookwise, this means that unless a book is on my “MUST HAVE IT RIGHT NOW” list, I’m going to wait for the trade paperback, or even the mass market paperback, edition of books I’m waiting for. Oddly, these days the paperback version might be more expensive than the hardcover. 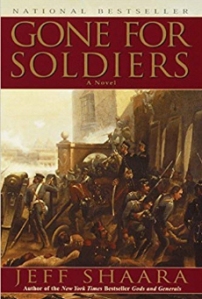 I do the same thing with movies because trying to set up closed captioning at a theater is a who needs it, so I seldom see any film before it reaches TV with closed captioning. I guess this is just part of getting old. By the time I read a book or see a film, the discussion has moved on to something newer. Sigh.

So, while waiting for the cheapest edition of the newer books, I’m constant grabbing books off my shelves and reading them again. (I think that if I read it two or three times, that cuts the cost by 1/2 or 1/3 and gets me into less trouble with my wife for sneaking books into the house.)

Yes, there’s Kindle, but that’s not my thing. I read stuff off the screen all day, so that’s the last thing I want while reading for 30 minutes before going to sleep.

Right now, I’m re-reading another Jeff Shaara novel, Gone for Soldiers, about the U.S. invasion of Mexico in 1846 while we fought over just where the southern border of Texas was going to be. Many of the soldiers who became well known during the Civil War fought in this war.

Sometimes historians call the Korean War the forgotten war. One might say the same thing about the Mexican War. It falls into one of those gaps in our history lessons in school. I’ve always found history interesting, so this is an enjoyable book to read while waiting for the John Hart novel I ordered from B&N.

What about you? Do you hold out for the cheaper editions of new novels or do you say, “what the hell?” and buy them as soon as the hardcover edition is released?

Malcolm R. Campbell is the author of Special Investigative Reporter.