Dan Brown’s novel the Da Vinci Code (2003) comes to mind when we discuss mystery/thrillers that simultaneously explore old secrets with the overlay of a present-day fight between good guys and bad guys.

This approach is often said to have originated with Katherine Neville’s The Eight (1988) which was influenced by Alexandre Dumas’ The Count of Monte Cristo (1844) and Umberto Eco’s The Name of the Rose (1980). The feature films Raiders of the Lost Ark (1981) and National Treasure (2004) and the Raymond Khoury novel The Last Templar (2005) are part of the same heady mix of present and past intrigues blended together in fiction.

Dan Brown probably trumped everyone else because his subject matter–the possibility of Christ’s marriage and subsequent birth line–mattered a great deal to Catholic and Protestant members of the Christian faith. 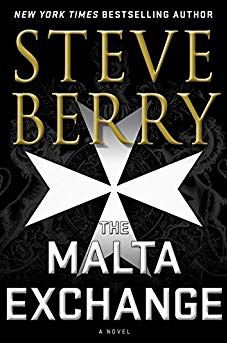 So now we come to The Malta Exchange, the 14th instalment of Steve Berry’s Cotton Malone novels that began with The Bishop’s Pawn. The novel focuses on the Catholic Knights Hospitaller, their influence in Malta, their overthrow by Napoleon, and the location of ancient documents that might influence the selection of a new Pope. I’ve found the Cotton Malone novels to be well written and absorbing thrillers.

I had more trouble with The Malta Exchange simply because Malta and the Knights Hospitaller are not (for me) as exciting as other historical intrigues in which the novels of this genre are based. It also seemed to be that Cotton, along with U.S. agent Luke, were not in control of their investigation. They were like corks being tossed around on an angry sea, discovering new information mostly when others deigned to tell them rather than from their own investigative skills.

Fortunately, the author’s note at the end of the book helps sort out the truth from the fiction.

12 thoughts on “Thinking about Steve Berry’s ‘The Malta Exchange’”