If you like police/FBI procedurals that aren’t jammed with weapons/ship/helicopter specifications of the kind you’ll find in the Tom Clancy (and similar) books, may I suggest Catherine Coulter? Her on-going “FBI Thriller” series began in 1996 with The Cove and continues through 23 books to Labyrinth which came out in July.  The also co-writes “A Brit in the FBI Thriller” series with author J. T. Ellison. 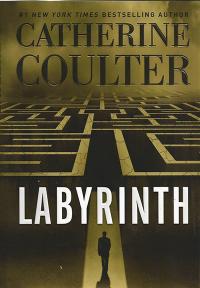 think I’ve read all of the FBI thrillers from the beginning and find them consistent. While some of them include some pretty nasty crimes, they are not gory. They focus on a married couple, Dillon Savich and Lacey Sherlock who are equally skilled and usually work together on cases. Sherlock is a crack shot and Savich is a computer geek with a search engine called MAX that he uses to help track down the bad guys. He’s also very intuitive, and that adds a nice wrinkle to the stories.

The Brit series features Scotland Yard agent Nicholas Drummond who first appeared in 2013 in The Final Cut.  The most recent book in the series is The Last Second.  As part of a special team, Drummond often finds himself back across the pond helping out in cases originating in the U. K.

I like the original FBI series the best because I’ve been reading it for quite a while and have watched the characters grow and mature and take on new kinds of assignments. A new reader, however, will find the two series similar in style. With few exceptions, the books can be read in any order.

From the Publisher’s Description for Labyrinth

“If there’s one thing that readers can count on in a Coulter novel it is that she always delivers amazingly eerie and complex thrillers” (RT Book Reviews), and Labyrinth is no different. With white-knuckled pacing and shocking twists and turns, this is another electrifying novel that will sink its teeth in you.

From the Publisher’s Description for The Last Second

From New York Times bestselling authors Catherine Coulter and J.T. Ellison comes a riveting thriller pitting special agents Nicholas Drummond and Michaela Caine against a private French space agency that has the power to end the world as we know it.

I’ve enjoyed the original series for years and have found the Brit series equally engaging. Perhaps it’s also your cup of tea.