Pie cherries are for people who make real pies rather than using the pie filling sludge that’s showing up on grocery store shelves. We tried the sludge once, and it was too sweet, too artificial, and basically inedible. 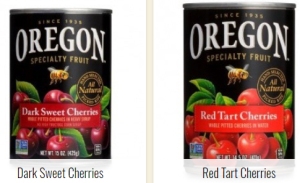 We each had once slice and threw the rest of the sludge-filled pie in the trash.

Kroger’s tart cherries were okay and the pie was much better. However, we had used the Oregon brand for years and thought only evil-doers would remove it from the shelves.

So, to hell with them (the evildoers). We bought a flat of cherries and berries straight from Oregon Fruit Products. Our pantry now looks like those pantries in TV commercials where the whole shebang has 100000 cans/boxes of one product.

Tonight, we’re having a blackberry pie. It looks good. I’ve refrained from eating a slab during the afternoon.

Most people put too much sugar in their pies. The situation is worse when they use that pie filling sludge. So tonight, we’re eating like royalty with my speciality beef stew and Lesa’s wonderful pie. And wine, of course.

2 thoughts on “Local stores took Oregon Pie Cherries off the Shelves, The Bastards”