Okay, I didn’t pick this place out on the House Hunters TV show, so you won’t see me in an upcoming episode looking at ensuite bathrooms, kitchen appliances, or backyard pools. Actually, this is Rome, Georgia’s radiation oncology center: 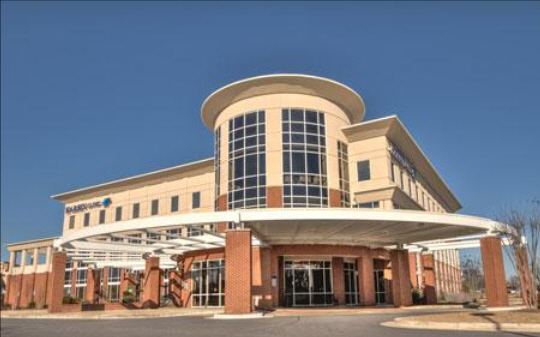 Since I’ll be going there daily for radiation treatments starting August 15th, I feel like it would be easier if I had a penthouse apartment upstairs. Two days of CT scans have been completed, so now they (the doctors) have a template for where they’re going to beam the radiation for 40 business days. I suggested that walking into a nuclear power plant would be faster, but apparently, that has unpleasant side effects.

The waiting room has large black & white photographs of people who went there and were cured. Each has a positive blurb next to it. There’s also a bell you can ring on the day you’re cancer-free. Since the prognosis is good so, I might right that bell, even though nobody’s promising to but a poster-sized photo of me in the waiting room with links to where people can buy my books.

The whole thing is expensive, but Medicare pays most of it. I’m not especially stressed out about this, just kind of ticked off that I’ll be driving over there every day (except weekends). On Facebook, a lot of people who’ve gone through this before, have spoken of their experiences and the fact that they’re doing fine now. That’s nice to hear!

In other news, we haven’t released Special Investigative Reporter yet because we’re waiting for a proof copy of the hardcover edition. I’m still working on another Florida novel but set it aside temporarily because this prostate cancer stuff was making it difficult to return to the world of Eulalie and Lena.

Have a great weekend, everyone.

4 thoughts on “My new home away from home”