Gloria Sawai’s short story “The Day I Sat With Jesus on the Sun Deck and a Wind Came Up and Blew My Kimono Open and He Saw My Breasts” in her 2002 short story collection A Song for Nettie Johnson The story originally appeared in 1976.

Peter Weiss’ 2001 play “The Persecution and Assassination of Jean-Paul Marat as Performed by the Inmates of the Asylum of Charenton Under the Direction of the Marquis de Sade.”

David Rakoff’s 2006 satire (with a bite) Don’t Get Too Comfortable: The Indignities of Coach Class, The Torments of Low Thread Count, The Never-Ending Quest for Artisanal Olive Oil, and Other First World Problems. 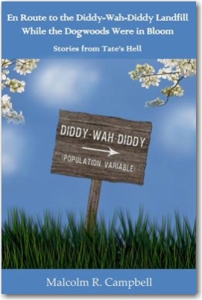 Having said that, here’s a bit of shameless promotion from your sponsor (AKA, me)

My 2017 Kindle short story “En Route to the Diddy-Wah-Diddy Landfill While the Dogwoods Were in Bloom” has a long title. But it reads fast, is satirical (with a bite), and is based on Florida folklore about a magical sound called Diddy-Wah-Diddy. The place was hard to find, but if you did find it, you could eat all you wanted to eat.

My re-telling takes a lot of liberties with the original because, well, I felt like setting it in modern times and made it about a junk food junkie obsessed with finding the town and providing it is real.

I don’t advise looking for it, but if you happen to find it, let the rest of us know where it is.