Actually, it’s not all luck. Since my hearing is terrible, the publishers’ skills in selecting prospective readers, listening to reading samples taken from the text of the books, and negotiating costs and schedules are more important than the luck. My audiobooks are available on Audible and Amazon. Those are good places to check out if you’re looking for your first audiobook. Or, you can go to the primary publication covering the market, AudioFile. In addition to industry information and profiles of narrators, they also publish reviews. What you want to look for there are reviews in the books have been designated as Earphones Award Winners. Those not only have a great story but a great narrator (also called a reader). 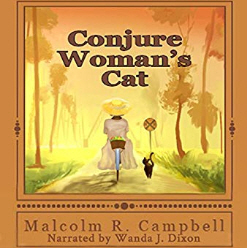 The audio edition of my novel Conjure Woman’s Cat has a wonderful narrator with lots of presence in her voice and style, that I wasn’t surprised when “AudioFile” liked her work and awarded her with a pair of red earphones in the review. Wanda J. Dixon turned in what, in the movies, would have been an Oscar-winning performance.

Wanda J. Dixon’s warmth and gorgeous singing voice are superb in this story about Conjure Woman Eulalie, which is told through the voice of her cat and spirit companion, Lena. Dixon zestfully portrays Eulalie, who is “older than dirt” and is kept busy casting spells, mixing potions, and advising people–that is, when the “sleeping” sign is removed from her door. Most distinctive is Eulalie’s recurring sigh, which conveys her frustration with Florida in the 1950s, when Jim Crow laws and “Colored Only” signs were routine. Dixon’s Lena is fully believable when she spies around town and reports to Eulalie that rednecks have raped and murdered a young woman. They almost escape until Eulalie persuades a witness to come forward. Listeners will marvel at the magical realism in this story and benefit from the helpful glossary of the charming local dialect. S.G.B. Winner of AudioFile Earphones Award © AudioFile 2016, Portland, Maine [Published: SEPTEMBER 2016] 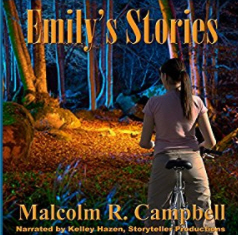 The first book of mine to come out in an audio edition was Emily’s Stories. (The e-book and paperback editions are out of print, but I’m happy to say that the audio edition narrated by actress Kelley Hazen is still available). It was strangely wonderful to hear (to the extent that I can) the voice of an actress I’d seen in movies and television reading my lines. “AudioFile” liked the book but didn’t award it with a pair of red earphones. That surprised me because the narration is spot on with multiple tones of voice for the different characters, including a bird and a ghost.

The second book in my Florida Folk Magic Trilogy, Eulalie and Washerwoman, was wonderfully narrated Tracie T Elice Christian. We’re currently in audiobook production for Lena, the final novel in the trilogy. An early satire of mine, Jock Stewart and the Missing Sea of Fire is, sad to say, out of print. However, the audiobook, with R. Scott Adams providing the realistic narration is alive and well on Amazon.

If you’re heading out on a long trip, maybe you should grab up several of these to relieve you of the boredom of hours and hours of clouds outside your aircraft or the trash trees and sagebrush outside your car window. Of course, it’s still legal to listen to audiobooks in your hot tub or recliner.