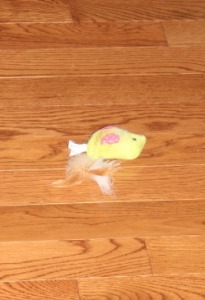 When we sold our previous house on the other side of the state, our realtor gave us a “Thank You” basket filled with candy, and knickknacks. Hidden at the bottom of the basket was this cat toy. You jostle it or pick it up, and a bell rings inside.

The only time we’ve heard the bell was when we stepped on the toy in the dark or kicked it out of the traffic flow in the kitchen or hallway. This suggests that our two cats don’t care about it.

Yet, it moves around the house. We have never seen either of our cats pick it up, much less carry it around. One day it’s in the kitchen. Then it shows up in the dining room, living room or entry hall. Our conclusion: THE TOY HAS A HEX ON IT.

It may even have a camera and mic inside sending a 24/7 feed to the FBI or CIA. We wonder what TSA would do with it if they spotted it in our carry-on luggage.

Yes, we should throw it away. But what if throwing it away or destroying it releases a hell-load of malevolent demons?

If anyone tries to give you a toy that looks like this, run. Or, if you live in a right-to-shoot-at-anything state, blast the toy with nothing smaller than a .50 caliber weapon.

4 thoughts on “JINKS ALERT: Do you recognize this cat toy?”