“They lived and laughed and loved and left.”
― James Joyce, Finnegans Wake

James Joyce is my favorite author, most especially his novels Ulysses and A Portrait of the Artist as a Young Man. With a minor in English, it was only natural and expected that I would study both of these books in school. School didn’t assign Finnegans Wake; perhaps they saved it for English majors and those working on a masters or doctoral degree. Or, perhaps the faculty was scared of the book.

I love the book, possibly for the language and the historical and cultural references and its endless puns and other humor. I also love chaos, and because of this, I suggest that people reading it for the first time should just go with the flow, setting aside worries or concerns about what it all means for a subsequent journey through the masterpiece. 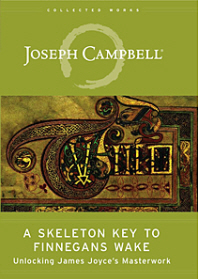 If you want help, there’s help out there. If you want industrial-strength help, one option is Roland McHugh’s Annotations to Finnegans Wake. If you want getting-started help, then the 1944 A Skeleton Key to Finnegans Wake by Joseph Campbell, Henry Morton Robinson, and editor Edmond Epstein will save most of your sanity. Before this book was published, I don’t think readers–or English department professors–thought it was possible for anyone to understand, much less explain Finnegans Wake.

Publisher’s Description: “Since its publication in 1939, countless would-be readers of Finnegans Wake — James Joyce’s masterwork that consumed a third of his life — have given up after a few pages and dismissed it as a ‘perverse triumph of the unintelligible.’ In 1944, a young professor of mythology and literature named Joseph Campbell, working with poet Henry Morton Robinson, wrote the first key or guide to entering the fascinating, disturbing, marvelously rich world of Finnegans Wake. The authors break down Joyce’s abstruse book page by page, stripping the text of much of its obscurity and serving up thoughtful interpretations via footnotes and bracketed commentary. A Skeleton Key was Campbell’s first book, published five years before he wrote his breakthrough Hero with a Thousand Faces.”

In her June 2018 MythBlast| Mythic Mavericks essay on the Joseph Campbell Foundation website, Leigh Melander writes that “For years I have been intrigued with what I perceive as a particularly Celtic sensibility, an ability to dance on the knife’s edge between insight and nonsense, tragedy and comedy, sacred and profane. Not to say that only those of Celtic antecedents have this ability, of course, but there seems to be a profound and specific love for this dance in Celtic myth, story, and literature.”

An apt phrase as the foundation celebrates James Joyce this month, the man–whom I believe–knew how to dance on that knife’s edge. Skeleton Key, says Melander, “Has lasted as the bedrock unlocking of Joyce’s profanely sacred nonsensical insights for generations of scholars and readers.” To be sure, more intensive books have been written in the last 74 years to help readers decypher the the enigma people perceive in this novel, but Campbell’s and Robinson’s work is a sound first step to breaking the code.

Susan G. Hauser wrote in her her “‘Finnegans Wake’ Breakdown,” in Salon that “We had come to realize that reading Finnegans Wake without assistance was akin to crossing the Sahara without a camel.” That’s not a surprising assessment inasmuch as some of the purported best critics in the known universe proclaimed before the ink was drying on the novel’s first edition that it was unintelligible, and later, that it is “the greatest book that nobody’s ever read.”

Hauser says that the group of friends who came together to read, discuss, and understand Joyce’s novel “Began with the same resolute spirit displayed by Stephen Dedalus at the end of ‘A Portrait of the Artist as a Young Man.’ We felt we were doing a noble and brave thing, though we never dared to compare ourselves to the Wake’s first readers. To our mind they were just as courageous as the first people who ever tried eating lobster.”

Perhaps you should read Hauser’s article before you try reading Finnegans Wake. If you are brave–and not one of these people who tends to ask “what’s the worst that could possibly happen?”–and decide to tackle the Wake, you’ll probably order a copy of Skeleton Key after reading the first several pages.

Campbell is the author of the magical realism Florida Folk Magic Series of novels that includes Conjure Woman’s Cat” and “Eulalie and Washerwoman.” Coming soon, the final novel in the trilogy, “Lena.”