“Interior monologue, in dramatic and nondramatic fiction, narrative technique that exhibits the thoughts passing through the minds of the protagonists. These ideas may be either loosely related impressions approaching free association or more rationally structured sequences of thought and emotion.” – Encyclopaedia Britannica

True stream-of-consciousness fiction can yield a lot of exciting passages about a character’s inner life (which s/he may or may not confuse with reality) as well as plot-advancing impressions that mesh well with the story line. 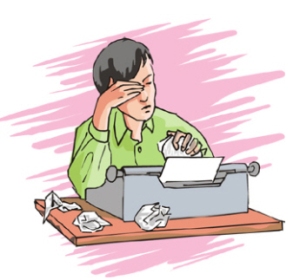 When I think of “too much interior monologue,” I’m not bashing well-written stream of consciousness techniques in spite of the fact that readers who don’t like literary fiction will hand out one- and two-star reviews for such novels on Amazon. When an author’s protagonist thinks about the situation s/he is in, that’s interior monologue.

Naturally, it’s normal and relevant to think about the situations we’re in. On the other hand, when this thinking does on for hundreds of words in multiple places in a novel, then it is likely to ruin the story. Writers are told that most of what they put in a novel should advance the plot. Overused interior monologue doesn’t advance the plot: instead it puts the plot on hold.

I just finished reading a novel with an interesting plot. A protagonist with a history of panic attacks which s/he manages with prescription medication (as much as possible) undergoes a traumatic experience before being put into an unrelated but more dangerous situation where her life and the lives of others is at risk.

I’m not going to identify the novel or even count the number of words in it and compute what percentage of it is plot-stalling interior monologue. My impression, though, is that 40% of the novel is interior monologue along the lines of. . .I need to keep my self from screaming. . .I need to relax. . .maybe I didn’t see what I think I saw. . .can I trust person XYZ. . .maybe if I told my story and/or got certain people to trust me, they would believe me and/or help me.

Stop Talking to Yourself and Do Something!

A little bit of this is fine. But when it goes on and on and on, there’s really nothing happening. Yes, maybe this would happen in real life, but writers are also told that writing fiction that copies real life–as a 24/7 video camera might view it–is bad because a lot of that real life stuff is trivial. In the novel I just finished, the character’s fight to keep her panic under control and her considerations about what may or may not be happening can be conveyed to the reader much faster.

When I see excessive amounts of interior monologue, my first thought is that the writer doesn’t really have enough depth in the plot to make a novel. That is, there are two few events and dialogue passages to sustain a book-length story. So, the interior monologue pads the length of the book out to the minimum number of words the author or publisher feels are necessary to call the book a novel rather than a short story, novelette, or novella.

I liked the plot of the novel I just finished. I liked the satisfactory ending and the fact that the protagonist’s experience ended up making her a stronger person ready to take stock of a lot of decisions about her life that had been stalled. I think it’s a shame, though, that the story was dragged down by the interior monologue instead of being pushed forward with a greater number of plot elements.

Dan Brown and others who write novels about ancient secrets with a modern twist to them are often criticized for stopping the action through the insertion of a lot of exposition in which one character tells another character what the ancient secrets are all about. This is a slick way of telling the reader what those secrets are about. If you were going to write a spoof of such books, you’d have one character pull a knife on another character and then–so to speak–freeze the action while the character tells somebody else why all this matters (for, say, a thousand words) and then go back to the knife fight.

That really tears apart the pacing of the action. It’s also very frustrating to the reader. Excessive interior monologue has the same negative impacts.

Malcolm R. Campbell is the author of “Conjure Woman’s Cat,” “Eulalie and Washerwoman,” and other magical realism and fantasy novels.