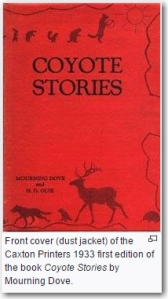 In the spring of 1930, Colville [Washington] author Christine Quintasket wrote to her non-Indian colloborator, Lucullus McWhorter, offering reassurance. “I am going to the mountains again in August,” she informed him, “when flowers of mystery are in full bloom, and then I shall ‘do my stuff.’ Our book is going to be a success. [My] Indian beliefs will prove it.” As these words suggest, Quintasket applied her ancestral training in support of her contemporary aims: to advocate for her Colville people and to preserve their collective culture. – Laurie Arnold in “Montana The Magazine of Western History, Spring 2017

Quintasket (1884-1936), who wrote under the name Mourning Dove (Hum-Ishu-Ma) is known for her novel Half-Blood: A Depiction of the Great Montana Cattle Range (1927) and her folklore collection Coyote Stories (1933). Both books are still available today.

Her novel was the first to be written by an Indian woman with an Indian protagonist. The novel explores the challenges faced by native American mothers who were married to white fathers. Greatly edited by McWhorter without Quintasket’s knowledge, the book did poorly.

Coyote Stories is a collection of tales Quintasket heard from tribal elders, including her grandmother. In his foreword to the book, Chief Standing Bear wrote,  “These legends are of America, as are its mountains, rivers, and forests, and as are its people. They belong!” Coyote stories sold well and received much critical acclaim.

A powerful force and yet the butt of humor, the coyote figure runs through the folklore of many American Indian tribes. He can be held up as a “terrible example” of conduct, a model of what not to do, and yet admired for a careless. anarchistic energy that suggests unlimited possibilities. Mourning Dove, an Okanagan, knew him well from the legends handed down by her people. She preserved them for posterity in Coyote Stories, originally published in 1933.

Here is Coyote, the trickster, the selfish individualist, the imitator, the protean character who indifferently puts the finishing touches on a world soon to receive human beings. And here is Mole, his long-suffering wife, and all the other Animal People, including Fox, Chipmunk, Owl-Woman, Rattlesnake, Grizzly Bear, Porcupine, and Chickadee. Here it is revealed why Skunk’s tail is black and white, why Spider has such long legs, why Badger is so humble, and why Mosquito bites people. These entertaining, psychologically compelling stories will be welcomed by a wide spectrum of readers.

Jay Miller has supplied an introduction and notes for this Bison Books edition and restored chapters that were deleted from the original.

According to Laurie Arnold, “As a child of the 1880s, Quintasket was a member of the first generation of Colville people who needed to be bicultural in order to maintain Native community ties and to control their participation in a Western world that was trying to overtake and assimilate them.”

As the Handbook of Native American Literature by Andrew Wiget notes, the Daily Oklahoman wrote in 1934 that Coyote Stories represents “a spiritual heritage that can never be replaced.” A. B. Guthrie said in the Lexington Kentucky Leader said that Mourning Dove is an effective storyteller with “a fine simplicity of expression.”