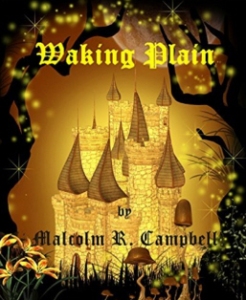 For years, I wanted to take a famous fairy tale and turn it upside down. The result is my Kindle story “Waking Plain” which is a fairy tale while poking fun at “Sleeping Beauty.”

In “Sleeping Beauty,” like other tales, the woman is always beautiful, needs a man to rescue her, and that man is somebody who (after waking her up or otherwise saving her), sweeps her off her feet because he’s not only a rich king or prince, but is really handsome.

What if “Sleeping Beauty” had been a hag? Yes, she’d probably still be asleep.

What if the guy who kissed her was the castle janitor? Does she wake up and die of fright? Does the king give him a meaningless title so he’s fit to marry the princess? Or, maybe the janitor is thrown in the dungeon?

These are the kinds of questions that need to be asked.

But, more could be done. So, I made the sleeper a rather plain prince who, as the story unfolded, was more of an out of sight, out of mind kind of royal. Who’s going to wake him up? Maybe nobody, God willing.