When the magic within a story is accepted as usual within an otherwise realistic setting, you’re probably reading or writing magical realism. It requires a light touch: if the magic becomes too overt or too over-the-top in terms of Hollywood special effects, then you’re out of the magical realism genre realm into fantasy, occult or science fiction. 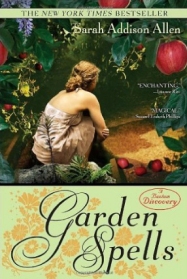 In her novel Garden Spells, Sarah Addison Allen tells a story about a woman named Claire Waverly living alone in the family’s old house in a small town. Her family has always been viewed by others as odd or unusual in some way. She runs a catering business that’s in high demand because she’s not only a great cook, but uses the products of her own garden to enhance her dishes in ways that seem to help those who need to be helped: their luck or their emotions improve, they feel better, find their lives improving. She doesn’t advertise this: if she did, it would sound like an unbelievable health food scam and would no longer be magical realism. Each member of the Waverly family has a special gift that causes others to see them as slightly odd and/or highly talented.

The novel works on many levels as magical realism because: (1) We’re not seeing Harry Potter magic, (2) The small town setting lends itself to local legends and gossip that create an eerie overlay of maybe and perhaps that’s never quite analyzed in the light of day, (3) The magic is low key, not the kind that in other novels would turn into a thriller, witchcraft hysteria, (4) Her characters do what they do without overtly using “magical techniques” that require practice, meditations, or the stuff of either fantasy or dark arts novels.

If you  want to write magical realism, it helps if you’ve read a lot of it and have a feeling for the genre as well of being comfortable leaving a lot of things unsaid or hinted at rather than approaching the unusual in your story with a full-bore emphasis on “creepy stuff” as  Stephen King might approach similar material. Here are a few suggestions

There’s no recipe here. In a sense, you have to feel it and sense it before you can do it. Once you practice the genre a lot, you don’t have to consciously think about the components any more than a person with years of experience thinks about what s/he does to make a bicycle work. It also helps if you have an open mind and a sense of wonderment or even magic about people and the natural world.