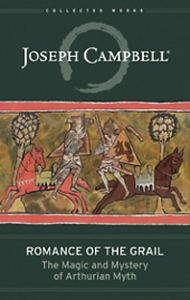 Joseph Campbell scholars and Arthurian legends students have been waiting for this volume for a long time. Sponsored by the Joseph Campbell Foundation, this collection focuses on the myths that introduced and excited Campbell about the over-arching mythic theories he spent a lifetime developing.

The book’s editor, Evans Lansing Smith became interested in disseminating Campbell’s views of the quests after discovering a typewritten copy of Campbell’s masters thesis “A Study of the Dolorous Stroke” which exams the motif of the wound and wasteland in the stories.

In an interview about the book, Smith said he hopes readers “will be as deeply engaged — and, indeed, as mesmerized as I was — with the power, grace, and fun with which Campbell retells the stories of the knights so central to the Grail romances: Yvain, Lancelot, Parzival, Gawain, Tristan, and others. As an Irishman, Campbell came from a long lineage of oral tradition, so that he was able in a couple of hours to convey more of the complexity and spiritual depth of those stories than many have been able to in long books on the subject.”

The Arthurian myths opened the world of comparative mythology to Campbell, turning his attention to the Near and Far Eastern roots of myth. Calling the Arthurian romances the world’s first “secular mythology,” Campbell found metaphors in them for human stages of growth, development, and psychology. The myths exemplify the kind of love Campbell called “amor,” in which individuals become more fully themselves through connection. Campbell’s infectious delight in his discoveries makes this volume essential for anyone intrigued by the stories we tell—and the stories behind them.

When Campbell talks and writes about mythology, he presents the material as though he were there when it happened. He makes complex themes accessible. The Grail stories certainly lend themselves to his expertise and insights.