Thomas-Jacob Publishing released a new edition of Smoky Zeidel’s The Storyteller’s Bracelet today, bringing the novel back into print after a twenty-two month absence. The book is available in e-book and Kindle editions. You can watch the novel’s trailer here. 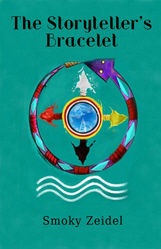 “It is the late 1800s, and the U.S. Government has mandated native tribes send their youth to Indian schools where they are stripped of their native heritage by the people they think of as The Others. Otter and Sun Song are deeply in love, but when they are sent East to school, Otter, renamed Gideon, tries to adapt, where Sun Song does not, enduring brutal attacks from the school headmaster because of her refusal to so much as speak. Gideon, thinking Sun Song has spurned him, turns for comfort to Wendy Thatcher, the daughter of a wealthy school patron, beginning a forbidden affair of the heart.

“But the Spirits have different plans for Gideon and Sun Song. They speak to Gideon through his magical storyteller’s bracelet, showing him both his past and his future. You are both child and mother of The Original People, Sun Song is told. When it is right, you will be safe once more. Will Gideon become Otter once again and return to Sun Song and his tribal roots, or attempt to remain with Wendy, with whom he can have no future?”

Smoky’s Description of the Cover’s Symbolism

“I’ve gotten a lot of questions about the meaning behind the symbols on the new edition of The Storyteller’s Bracelet. The wavy lines at the bottom represent water, which plays a life-changing role for my male protagonist, Otter/Gideon. The stairway through the clouds represents the gateway to the 5th World in Hopi mythology. The arrows point to the four cardinal directions and their colors represent the direction people of color scattered at creation. (These colors can vary from one tradition to another; these are the colors the Hopi use.) Finally, the rattlesnake is a symbol of new life, of transformation. Rattlesnake sheds her skin and begins life anew.”

Smoky also released a companion short story on Kindle called Why the Hummingbird is So Small, “the enchanting story of Sun Song, a storyteller for her tribe, as she visits Fuss, her hummingbird friend, on the day before she is to leave for Indian School in the East.” You can visit Smoky’s website here.