It’s difficult to read about Montana without coming across Charlie Russell sooner or later. He’s the state’s most celebrated and most widely known artist. This book offers a view of Russell’s work in the collection of the Montana Historical Society in Helena. Nothing is better than seeing the paintings up close. If you can’t do that, this book is a fine introduction. 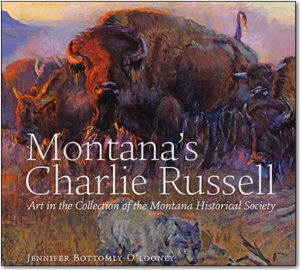 From the Publisher: Montana’s Charlie Russell brings to life the Montana Historical Society’s world-class collection of paintings, drawings, sculptures, bronzes, and illustrated letters by the Treasure State’s famed “Cowboy Artist.” Using advanced digital technology, each of the 230 pieces in the Society’s permanent collection has been meticulously photographed to bring to life, in vivid color, Russell’s artistic mastery. Carefully researched scholarship illuminates the stories behind each artwork. The result is a catalog of Russell’s art as you’ve never seen it before.

“In 1952 the Montana Historical Society acquired the Malcolm Mackay family collection of the artwork of Charles M. Russell that became the heart of its unmatched assemblage of the famed Montana cowboy artist’s masterpieces, paintings, illustrated letters, sketches and sculpture.

“Since then, it has been the dream of many to reproduce the entire MHS Russell art collection in a high-quality book that would celebrate the artist’s vision of Montana and the breadth of his amazing career — that took him from cowboying in the Judith Gap to one of the best loved artists of the West…

“…K. Ross Toole, MHS director in 1952, said while raising funds to acquire the Mackay collection: ‘If Montana has contributed one thing to the heritage of the whole West, it is Charles M. Russell’s paintings …. It was Montana that inspired him; it was Montana that he painted.'”

With this book on your coffee table, you can turn off the TV for the Winter.

Malcolm R. Campbell is the author of “The Seeker,” a book about mountains, first loves and betrayal set partly in Montana’s Glacier National Park.