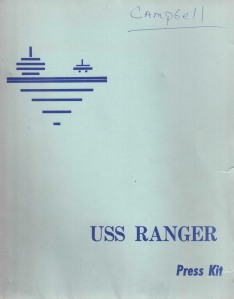 While sorting through boxes of old file folders in the garage, I came across a 1968 press kit for the decommissioned aircraft carrier USS Ranger (CVA-61). (The Ranger was active between 1957 and 1993).

These kits were handed out to reporters and special guests who came aboard ship in port or at sea. They contained information about the ship’s history and its departments, aircraft, and a variety of photographs of the ship, planes and personnel.

In addition to the carrier’s missions that stretched between the Vietnam War and the Gulf War, the Ranger is notable for being the first carrier to be built from the keel up with an angled deck.

A Portland Oregon foundation worked for some time to acquire the ship for use as a museum, but the effort fell through when it didn’t gain enough support from high-profile financial and political individuals and groups to put together a working plan that met the navy’s strict requirements.

To learn more about this effort, see USS Ranger Closer to New Home in Portland and Navy to Scrap Historic Aircraft Carrier – UPDATE.

Consequently, the ship is being scrapped this year. Had the ship been converted into a museum, I would have sent them this press kit, copies of the shipboard magazine and cruise book, and a fair number of news releases I wrote for the military and civilian press while on board.

As Wikipedia reminds us, “Ranger appeared on television in The Six Million Dollar Man, Baa Baa Black Sheep and in the films Top Gun, Star Trek IV: The Voyage Home (standing in for the carrier USS Enterprise), and Flight of the Intruder.”

I worked in the ship’s public affairs office and put together a lot of these kits during my time on board in 1968 and 1969.

The press kit usually contained pictures of the aircraft of from the squadrons assigned to the ship during the October-to-May deployments to the western pacific. The A-4s in this photo belonged to Squadron VA-155, the “Silver Foxes.

In addition to the standard materials, we included copies of the latest news releases about shipboard operations and deployments as well as visits by film companies and USO shows.

Finding Your Way Around

Television shows like JAG and NCIS frequently show shore-based navy and marine personnel getting lost on board aircraft carriers when trying to find their way between the bridge, the mess decks and their quarters. It’s easy to do. We cleared up the confusion for guests by handing out a diagram that showed how the decks were numbered.

The sheet noted that every single compartment on board has a number indicating its deck, location, purpose and opened/closed status based on the ship’s “Material Condition of Readiness” (XRAY, YOKE, ZEBRA and WILLIAM).

I read with interest the news stories about the USS Gerald R. Ford (CVN-78) which is currently undergoing tests prior to its entry into the fleet in 2016. The changes in design and capability of the Forrestal-class carriers ( Forrestal, Saratoga, Ranger and Independence) built in the 1950s and the new Ford-class carriers (to include the Ford, Kennedy and Enterprise) is amazing. Even the sailors serving aboard the current Nimitz-class carriers will see exciting changes.

I suppose ships will continue to use some form of press kit, perhaps printed off as needed with different combinations of pages and pictures when dignitaries and reporters arrive. Most of these folks will probably look at the skips’ websites and print out their own press materials before they arrive. When describing the Ranger to others, we mentioned the size of the flight deck, the weight of the anchors, and the number of crew members.

We also said the ship was a floating city. I see that some things don’t change. In the news stories about the Gerald R. Ford, that phrase is still being used.

Malcolm R. Campbell’s novels include “At Sea,” an adventure inspired by his two western Pacific cruises on board the USS Ranger. Ranger was, in those days, called the top gun of the Pacific Fleet.