One night in 1967, I picked up a white candle on the campus of Syracuse University and joined a long line of students that moved like a ribbon of continuous light across the dark campus. We did not use the words Dona nobis Pacem (Grant us Peace) as many bloggers are saying across the world on this November 4th day in which we blog for peace. We were, of course, protesting the Vietnam War in those days when many of us sang  “Where have all the flowers gone.” 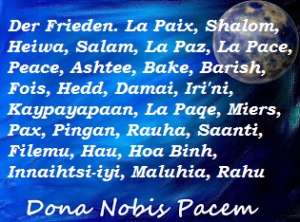 Since that night of candles and songs, at least 10,960,000 have been killed by wars. “Gone to graveyards every one,” the old Pete Seeger folk song tells us. “When will they ever learn?”

My Scots ancestors once sang—and often still sing—an old song called “The Flowers of the Forest,” a lament about the grief of the women and children after James IV and his 10,000 men died at the Battle of Flodden Field in northern England in 1513.  I wonder if Pete Seeger ever heard the words: “The Flooers o’ the Forest, that fought aye the foremost, The pride o’ oor land lie cauld in the clay.”

Since 1967, we have had many occasions to ask “When will they ever learn?”  Even in these days of terrorists and unstable governments and territorial disputes that seem to have no solutions, there may be hope. In his October 2011 article in Foreign Policy “Think Again: War,”  Joshua S. Goldstein writes that even though 60% of Americans responding to a recent survey thought a third world war was likely, fewer people per year have been dying in wars in years between 2000 and 2011 than in the 1950s through the 1990s.

One reason for the decline is the smaller scale and scope of the conflicts after World War II, Korea and Vietnam. According to Goldstein, “Armed conflict has declined in large part because armed conflict has fundamentally changed. Wars between big national armies all but disappeared along with the Cold War, taking with them the most horrific kinds of mass destruction. Today’s asymmetrical guerrilla wars may be intractable and nasty, but they will never produce anything like the siege of Leningrad.”

Is there reason for hope in such an analysis? Goldstein suggests that the world seems more violent now than it ever did in part because information is more accessible and pervasive. Whether it’s via 24-hour news channels, online news sources, or social networks like Twitter and Facebook, we hear one way or the other about every car bomb, every attack and every atrocity. On such days, I’m still tempted to ask, “When will they ever learn?”

The world, writes Goldstein, also seems more violent because society’s standards have risen. A day’s worth of fighting in Iraq or Afghanistan brought news of battle deaths that were a tiny fraction of the numbers killed per day in World War II. Yet our anger about every five soldiers or civilians killed in recent these conflicts was, it always seemed, much higher than for every 5,000 killed in the 1940s.

We’re less tolerant of violence now. The in-your-face nature of TV war reporting that began during the Vietnam War is showing us in ways we cannot accept where the flowers are going and how they got there. The images out of Iraq showed us more of what we didn’t want to see.

Perhaps we are learning. Perhaps our flowers of the forest will remain in the forest and the day will come when laments and folk songs about war and grief can be left on dusty shelves and slowly forgotten. Until then, we still say Dona Nobis Pacem and hope people are listening.