I’m pleased to welcome author Melinda Clayton (Appalachian Justice and Return to Crutcher Mountain) to the Round Table today to talk about her new novel Entangled Thorns. Once again, Clayton heads back to Appalachia for a compelling story about hard times and hard memories. Entangled Thorns, which tells the story of Beth Sloan and the “infamous Pritchett family of Cedar Hollow, West Virginia,” was released by Vanilla Heart Publishing June 27, 2012.

Malcolm: Like Appalachian Justice and Return to Crutcher Mountain, your new novel Entangled Thorns has an Appalachian setting. What draws a Florida author away from the orange groves and sunny beaches into the hills of West Virginia for her storytelling?

Melinda:  My mother’s family is from West Virginia, around the Charleston area.  My grandfather was retired from the mines.  Both of my maternal grandparents passed away when I was a teen, but up until that time we visited every summer.  I loved everything about it:  the people, the mountains, the wildlife.  My mother was born in a tiny place called Big Ugly Holler, which served as the inspiration for Cedar Hollow.  It doesn’t exist now, but we once hiked into the mountains to see what was left of it.  There was no road; by that time, there wasn’t even a trail.  When we finally reached our destination all that remained of Big Ugly Holler were a few foundations and chimneys covered in vines.

Malcolm: In Entangled Thorns, your protagonist Beth Sloan has been running from and/or repressing her troubled childhood until circumstances force her to confront it. Your protagonists in Appalachian Justice and Return to Crutcher Mountain were also wounded as children. Does this overarching theme of your work come out of your experience as a psychotherapist or the kinds of stories you’re drawn to on the nightly news? 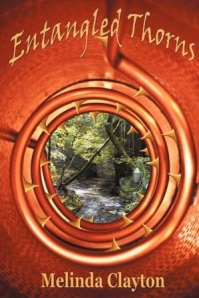 Melinda:  I love this question, and the answer is, “both.”  I read a book when I was very young – I’d give anything to remember the title of it – but it was about a social worker who worked with troubled kids.  Ever since then I knew I wanted to work with troubled children and families in some capacity.  I’ve also always been drawn to true crime stories, as morbid as that might seem.  There is something about the workings of the human mind that absolutely fascinates me, particularly when it goes off-kilter in some way.

Malcolm: You recently completed a Ed.D. in Special Education Administration program which required a dissertation. How did you manage to jump back and forth between academic writing with its reliance on sources and a formal style to fiction with its emphasis on people, adventure and an accessible style?

Melinda:  That was a little challenging at times.  The act of writing fiction was a great stress reliever, but I had to work to keep the informal language (contractions, slang, etc.) from entering my academic writing.  It was tempting at times to put in something like, “This research will show that there ain’t no correlation…” for the pure fun of seeing my committees’ reaction.

Malcolm: How does the doctoral work fit into your professional goals?

Melinda:  My ultimate goal is to teach at a college level.  My doctorate sort of combined two fields of study, since my M.S. is in Community Agency Counseling, and my doctorate is in Special Education Administration.  I’d love to contribute to the field by demonstrating how the two fields often go hand-in-hand and should support each other and work together, instead of arguing over funding streams and services as so often happens.

Malcolm: For the general public, Appalachia conjures up such themes as isolated, subsistence living, hard-working and persevering people, coal mining and other environmental excesses, and pure, raw music unlike that from any other part of the country. How do your characters and plots mesh with or run counterpoint to these stereotypes? Does the lure of Appalachia for your storytelling ever translate into other areas, say, in tempting you to move there as a teacher or psychotherapist?

Melinda:  It’s a delicate line to walk.  I know from my own family that the manner in which Appalachia is often portrayed can be a sore point.  At the same time, I want the story to reflect what is, in some areas, true to life.  I relied heavily on not only my research, but also my own memories as well as my mother’s experiences.

also know from my experiences that the poverty associated with Appalachia exists elsewhere.  There’s no need to travel to Appalachia to encounter it.  In the late 1980s, when I was fresh out of college with a B.A. in social work, my first job was as the coordinator of case management services for a rural mental health center in Tennessee.  My case workers and I were responsible for a three county area, working with the most impoverished of families. Many of our clients were without electricity or running water.  Many also lived in the most basic of housing structures, without floors or internal walls.  I think it’s difficult to believe there are still families living in such poverty in the U.S., but there are.

Malcolm: Thomas Wolfe brought the phrase “You Can’t Go Home Again” into general use. “Going home” can be awkward, embarrassing or frightening on so many levels even for those of us who had relatively normal childhoods. But your characters had strong reasons for avoiding home, yet all of them find that they must go home again. Does this theme grow out of the psychologist’s seemingly favorite “well me about your childhood” question or is it more that home is the only place where the issues of home can be fixed?

Melinda:  Again I have to smile, because it’s both.  My writing of home is a very transparent attempt to create the home I miss.  Until I was about twelve, we lived in my father’s hometown in TN surrounded by aunts, uncles, cousins, and grandparents.  We had fried chicken at Mawmaw’s house every Sunday after church, then spread blankets on the lawn under the pecan tree and visited well into the evening.  A rough couple of years ended all that.  One aunt died tragically in a car accident, another divorced, my grandparents lost their home to a fire, and my family moved away.  I’m sure it wasn’t as idyllic as I remember, but it’s pulled at me ever since.

But I also think it’s necessary to revisit the places that have scarred us, either symbolically (often for safety’s sake only symbolically) or physically.  We have to face our issues before we can resolve them.  Burying them doesn’t work; we have to excise them, examine them, and then choose to heal and move on.

Where to Find Melinda on the Internet

Blogs on Xanga and WordPress