George Simon Kaufman (November 16, 1889 – June 2, 1961) was an American playwright, theatre director and producer, humorist, and drama critic. In addition to comedies and political satire, he wrote several musicals for the Marx Brothers and others. He won the Pulitzer Prize for Drama for the musical Of Thee I Sing (with Morrie Ryskind and Ira Gershwin) in 1932, and won again in 1937 for the play You Can’t Take It with You (with Moss Hart). He also won the Tony Award for Best Director in 1951 for the musical Guys and Dolls. – Wikipedia

After working several years as a director of amateur theatrical groups and an entertainment director at summer resorts, he scored his first Broadway hit with Once in a Lifetime (1930), a farce about the arrival of the sound era in Hollywood. The play was written in collaboration with Broadway veteran George S. Kaufman, who regularly wrote with others, notably Marc Connelly and Edna Ferber. (Kaufman also performed in the play’s original Broadway cast in the role of a frustrated playwright hired by Hollywood.) During the next decade, Kaufman and Hart teamed on a string of successes, including You Can’t Take It with You (1936) and The Man Who Came to Dinner (1939). Though Kaufman had hits with others, Hart is generally conceded to be his most important collaborator. – Wikipedia 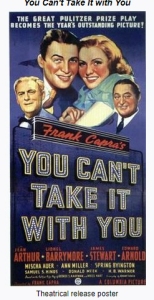 As my wife and I watched Frank Capra’s “You Can’t Take it With You,” based on the Pulitzer Prize-winning play by Kaufman and Hart, I thought back to how insular we were before the Internet and Satellite TV networks. Now we can watch all the old movies and research where they came from.

Growing up, I knew nothing of Kaufman and Hart even though they “owned” broadway for years and had worked on projects from the Marx brothers comedies to Camelot. I happened to hear of them in 1961, the same year they both died.

I went to a high school journalism institute at Indiana University in 1961, and one of our special trips was to the famous Brown County Playhouse, owned at the time by a foundation association with IU. On stage, that night was “Light Up the Sky” by Kaufman and Hart. What a hoot. And I wondered then, just who are these people that can write such wonderful (and humorous) dialog?

When I got home, I raced out and bought a copy of Hart’s autobiography Act One. For a Florida boy who knew nothing about Broadway and the world of plays, it was an eye-opener. It would be years before channels like Turner Classic Movies came along and allowed me to see the work of Kaufman and Hart. Somehow, it’s had an impact on me, my sense of how writers write, and produce what we go to the theater to enjoy.

Somehow, I have a feeling that in this fast-paced world when the Internet and satellite TV make so much available, that most people have never heard of either of these playwrights. What a shame. For me, learning about them was part of growing up and becoming a writer–and one who can finally enjoy what they wrote.

Malcolm R. Campbell is the author of the comedy/satire “Special Investigative Reporter” which, he hopes, might remind some people of the dialogue of Kaufman and Hart.