One thing I hear from other authors is how easily they become discouraged when they look at the websites of other authors and/or the authors’ listings on directories such as the one maintained by Poet’s and Writer’s Magazine.

Even though many of these authors are publishing books, stories, or articles, they feel they’re coming up short when they look at the bios of other authors and see lists of grants, awards, fellowships, and literary magazines. It’s always worse, I think, to see that an author one has never heard of has been published in literary magazines that have rejected one’s work. 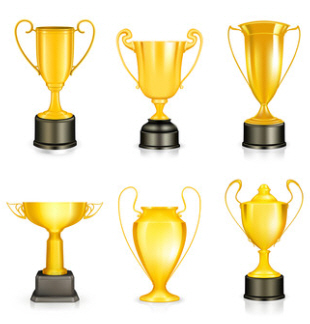 I’ve never been able to get a short story of mine published by Glimmer Train Magazine. They’ve been around for 30 years and are notoriously difficult to get into. They pay better than most, so they attract the best. When I heard that the magazine was discontinuing publication at the end of this year, I tried one more time. No dice. Had the story been accepted, I would have received a nice payment and some wonderful resume material.

But, there’s no sense dwelling on that. I have to accept that in addition to nonfiction, my strength is novels rather than short stories. So, I am grateful for that rather than the fact my shorter fiction work hasn’t found an audience. And, as for poetry, forget it!

Dwelling on what one usually cannot write is, for sake of a better analogy, rather like a successful tennis player wishing that s/he was also a successful Olympic swimmer. There are different skill sets involved. So, why not improve the one where your talents excel rather than feeling down and out about the venues where your talents don’t seem to fit? Nonetheless, I like submitting stories (and even poems) to a few contests a year because it’s good practice. Sure, one usually ends up editing and polishing material that might not win or even be called a finalist, but I think this work helps make our writing better.

If you’re interested in finding contests that might give you a chance to practice your craft, “Poets and Writers Magazine” has a well-maintained listing of opportunities on its website. Also, check out the listings on Funds for Writers: they have a free newsletter as well as a more extensive newsletter you can subscribe to.

C. Hope Clark has been advising authors through her weekly newsletter “Funds for Writers” for twenty years. I’m a long-time subscriber and look forward to Fridays and the arrival of the newsletter in my in-basket because it contains nuts and bolts tips, writing ideas and inspiration presented with a positive can-do attitude, and lists of upcoming writing opportunities. 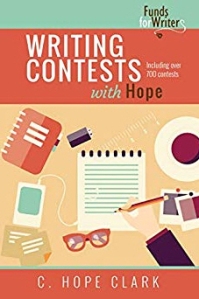 Clark, who is also a novelist (The Carolina Slade Mysteries and The Edisto Island Mysteries) brings the best contest-related ideas from her newsletter to Writing Contests with Hope that was released in paperback and e-book in February. “This book has been a long time coming, “said Clark. “It speaks of the myths of contests, and shows how amazing contests can be for your career.”

Everyone loves winning, but nobody enjoys losing. Writers are no exception. Contests in the writing profession offer opportunity in many forms, but so many writers fear entering. Whether they fear scans, rejection, or being judged, they hold back. On the other hand, others throw caution to the wind and enter every contest in sight, likewise winning nothing. Contests are a serious venture. They can catapult a career if entered thoughtfully with serious intent. Yes, intent. Contests aren’t a whimsical endeavor. With planning, practice, and research, writers can enter contests and genuinely improve their odds of success.

A lot of writers I know don’t enter contests. That makes sense in they’re busy finishing their latest novel or meeting a deadline for a magazine article. Otherwise, I don’t understand why they don’t do it. Hope understands: in the book, she discusses some of the usual reasons writers don’t enter any of the dozens of competitions available each year. If you have concerns about contests, take a look at the What’s Inside feature on the book’s Amazon listing. The point of view there may change your mind. If it does, this book will increase your odds of success.