Once the barrage of lightweight summer books has come and gone, readers’ thoughts to turn fall reading and holiday gifts. To help us make our choices, the usual flurry of best books of the year articles and lists is showing up all over the Internet and in your favorite book stores. For this, you can always start with the list of 101 best books of the year on Publishers Weekly.  (The feature has site errors in it, but click on OK and get past them.) Or you can look at USA Today’s list of fall books here.

Indie Bound publishes a “Next” list for upcoming books. Here are their favorites for November:

Likewise, Southern Independent Booksellers Alliance (SIBA) keeps up with bestsellers for bookstores in the southeast. Here’s the link to their hardbacks PDF. On the download, they’ve highlighted several books, including:

When people ask me about fiction and poetry, my answer depends on what (if anything) I know about the person. Do they like romance, fantasy, general fiction, crime? However, my three top picks of the year in fiction are:

And, for those who like poetry (I think Bryant’s latest book is only on Sams Dot Com): 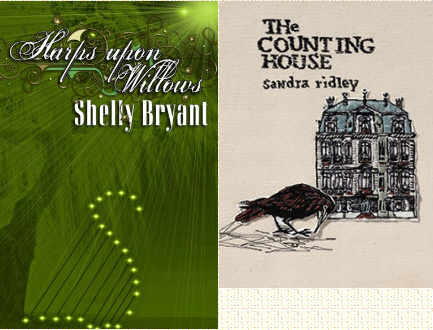 I’m intrigued by these short stories, but they may not work for everyone:

In  the crime category, I liked Robert Galbraith’s (J. K. Rowling) The Cuckoo’s Falling and  Stephen King’s Joyland. In plays, I liked Elizabeth Clark-Sterne’s On the Doorstep of the Castle. Also, Tracy R. Franklin’s strong collection of poetry and essays Looking for the Sun Door is a beautiful book. And, since a short story of mine appears in the anthology, I have to mention Spirits of St. Louis: Missouri Ghost Stories. Of course, I wouldn’t mind if you clicked on the banner below to take a look at my new contemporary fantasy The Betrayed.

I hope you find plenty out there for your to-be-read list and for the lists of your friends and family.

Shelly Bryant (Cyborg Chimera, Under the Ash) is a prolific poet whose work never fails to inspire readers with pointed and poignant images that rise from the earth on the wings of spare words. Her new collection Voices of the Elders from Sam’s Dot Publishing is startling in the risks taken, the variety of its forms and references and the scope of its vision.

The fifty-five poems in this 59-page volume, many of which have appeared in “Aoife’s Kiss,” “Scifaikuest,” “Sloth Jockey” and other publications, are grouped into four sections—seduction, obstruction, destruction and abduction.

Jason Gantenberg aptly describes Bryant’s scope in these groupings in the book’s introduction: “What I’ve always loved about Shelly’s writing is the breadth of genres and periods in which she embeds her thoughts. There are few writers who will quite so fearlessly juxtapose classical Anglo-Saxon fantasies about fairies and dragons with ruminations on supernovae, historical fiction with futurism, cynical politics with whimsy.”

In “Oort” Bryant writes of “a failed planet” that’s “denuded of destiny,” followed by “Styx” an “eternal river” with an “ever-changing flow,” followed by “Bargain Hunter” about a young man in a store who makes a five-dollar purchase out of books for “aficionados with loads of cash.” The poem ends with these lines:

“Keep it in the Family,” begins:

familiarity
and its child
contempt
creep into familiar lines

And “Voice of the Elder” ends:

the elder dryad
to the swirling storm
raises his dying howl

I will return to “Memories Shared, Standing on Your Balcony,” the writer’s block in “Project,” “Men of Renown” with their Achilles heels and the other fresh-faced words in Voices of the Elders many times, for while they speak to me of today’s world in today’s language, they are, I think, penned by an old and very wise soul.