Originally published in 1870 by the Reverend E. Cobham Brewer, it was aimed at the growing number of people who did not have a university education, but wanted to understand the origins of phrases and historical or literary allusions. The ‘phrase’ part of the title refers mainly to the explanation of various idioms and proverbs, while the “fable” part might more accurately be labelled “folklore” and ranges from classical mythology to relatively recent literature. On top of this, Brewer added notes on important historical figures and events, and other things which he thought would be of interest, such as Roman numerals. – Wikipedia

Prior to the Internet’s arrival allowing us to Google almost anything, I found this book to be a handy (and often distracting reference) for tracking down the origin or meaning of popular phrases, people, odd words, and the other kinds of stuff that authors ponder.

For example, from my 14th edition published in 1989, here are a few entries:

For authors, the book is a gold mine. I’ve shown only a few short entries here that will fit in this post. Some of the entries’ definitions often go on for multiple paragraphs and include cross-references. Many entries include similar words or phrases that alphabetically follow the first.

Here’s the publisher’s description for the most recent edition:

‘This is, in fact, not what you were looking for; but it’s much more interesting’ Terry Pratchett 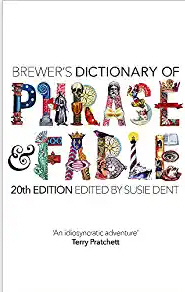 Much loved for its wit and wisdom since 1870,Brewer’s Dictionary of Phrase and Fable takes you on a captivating adventure through its trademark blend of language, culture, myth and legend. Nowhere else could the histories of the guillotine and Guinness stout sit so comfortably alongside the KGB and the Keystone Kops. Brewer’s is a catalogue of curiosities and absurdities that, over almost 150 years in print, has acquired near-mythical status.

Edited by Susie Dent, this new edition includes a brand new Collection of Curious Words and many new and updated entries. Its pages brim with esoteric and entertaining oddities – everything from curious customs to the world of newspapers and political alliances of yesteryear – all seen through the distinctive Brewer lens.

This twentieth edition of Brewer’s Dictionary of Phrase and Fable encapsulates all the charm and wit that characterise its predecessors and maintains the standards of scholarship and eclecticism that have long been its hallmark.

Whether you’re a committed Brewerphile or a newcomer to its pages of fascinating entries, this edition will draw you in and keep you glued to its rich mix of eccentric nuggets.

As Susie Dent explains in the foreword, Brewer’s “is unlike any other reference book that exists, anywhere.”

If you read all of my books (why not start today?), you’ll probably discover that I’ve made use of Brewer’s Dictionary.