In our kitchen, we keep a colorful scenic calendar, sometimes featuring wildlife and sometimes featuring scenes from national parks and other inspiring landscapes. In my den, I always have a calendar of historic black and white photographs. It comes with my membership in the Montana Historical Society (MHS). These old photographs tell many stories and I never tire of looking at them throughout the year. As more and more archives are digitized, pictures such as those in the calendar are often available for research online. Here’s the cover of my MHS calendar for 2019: 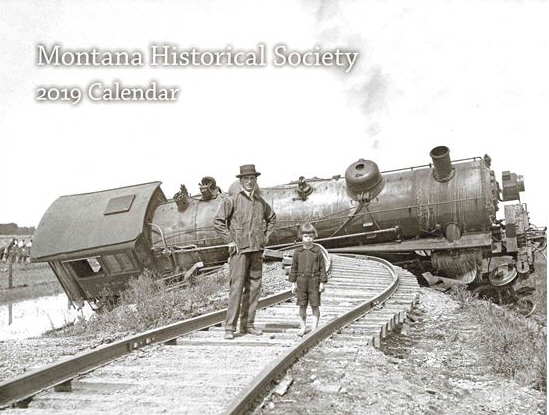 Hmm, we seem to have a problem here. When I worked as a volunteer at a railway museum, our library included a lot of photographs of wrecked locomotives. One of our members had once worked on steam locomotives for the railroads. When I asked him what happened to the locomotives in the pictures, he said they hauled them into the shop, fixed them, and put them back on the line. Today, I suppose the insurance company would come out and mark the equipment as totaled.

These old pictures are better than rare treasure for history enthusiasts; fans of (for example) trains, old cars, historic buildings; teachers who are working on lesson plans for K-12 classes that focus on state history, authors, and others. The national park services has an archive of old photographs.

You can find other photographs online at the Library of Congress and in the archives of many states under such names as Florida Memory and Georgia Encyclopedia. (Some of these sites include teacher lesson plans.) This access has improved from the old days when one had to travel to a museum on the far side of the country to see roughly classified boxes of papers and photographs in a storage area. Likewise, the historical societies in many states also support the digitization of old newspapers, many of which are appearing in databases sophisticated enough to allow for searches on words in the news stories and photograph cutlines.

It bothers me when I hear that many state school systems no longer teach state history lessons. I know it’s often hard to squeeze in local history when courses must include all of world history or all of U.S. history into an hour a day for one or two semesters. Historic old pictures, when available in a print format, give school systems the opportunity of placing a few of them in frames (with captions) in hallways and classrooms. They might just attract student attention. My wife once curated and mounted an exhibit of old photographs in a high school where we used to live. Opening day attracted a lot of attention, including a news story in several papers.

I’ve been happy to see many of these old pictures showing up on Facebook, sometimes from sources such as “Smithsonian Magazine” that remind people of lesser-known events and people. Many of them get a lot of LIKES and comments, including “Why wasn’t this information in my school history books?” (I often wonder why as well.)

If you know about your state’s history, I think you have a better shot at understanding why things there are as they are. You can also help combat misinformation in hastily researched news stories and online essays in which the writer clearly doesn’t know what happened in his or her state prior to last week. Growing up in Florida, I constantly saw (and still see) mistaken pronouncements about the reasons for the Seminole Wars or about the conflicts between Spain and France to control the region. You can probably cite similar examples from the state where you live.

Old photographs won’t fix the gaps in our educational systems, but they might attract some attention to the many things we don’t know about the places where we live.

Sometimes I think historical research for my novels set in Montana (“The Sun Singer” and “Sarabande”) and Florida (“Conjure Woman’s Cat,” “Eulalie and Washerwoman,” and “Lena”) took more hours than writing the novels. I didn’t mind because the old photographs and newspapers were very addictive.