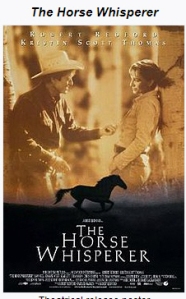 Like many avid–or perhaps crazed–readers, I have several go to books that never disappoint me when I re-read them while waiting for something new to arrive in the mail. I always re-read my favorite books of the year several times–such as those by Ruta Sepetys, Sunetra Gupta, and John Hart. But when I truly want to escape reality, I turn to Pat Conroy’s The Prince of Tides or Nicholas Evans’ The Horse Whisperer.

I’ve seen the feaure films based on each of these with opposite reactions. I liked Pat Conroy’s book better than the movie and Robert Redford’s movie better than Nicholas Evans’ book.

I like The Horse Whisperer because it’s a strong story about the healing of a young injurered teenager (Grace) and a severely damaged Morgan horse (Pilgrim). I am among those who think Evans botched the ending of the book with a brutal death scene that was neither foreshadowed nor necessary. In fact, I dislike that ending so strongly, that I stop reading several pages before it occurs.

Fortunately, Robert Redford, who starred in and directed the film, gave us a much more realistic and suitable ending. While the truck wreck scene in the book is handled well, seeing it on the screen has such a strong impact, I think a lot of people who go back to the film again often skip it.

I suppose there are a lot of extenuating personal reasons why people re-read books multiple times. In my case, Montana is my favorite state, I used to ride when I was younger, and have always been fond of Morgan horses. Or, perhaps I just like the chemistry of the story and the characters in it. And then, working a ranch and being a horse whisperer would have suited me just fine.

“Mountain Song” is set on a Montana sheep ranch with absent parents, a nasty grandfather, and a medicine woman, and a Friesian horse, all of whom shape David Ward’s life into the mess that it becomes.