Many men in my generation grew up watching westerns at the theater and on TV. The first movie I remember seeing was “The Big Sky” based on the A.B. Gutherie’s 1947 novel set in Montana. Name a western movie made between 1940 and 1970, and I probably saw it. Yes, I liked “Shane” and “High Noon,” and some years later, “Lonesome Dove.” Yet, I haven’t read a western in years, much less gone to a western genre film. 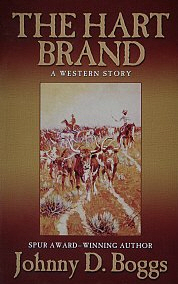 You can tell just how long I’ve been away from westerns when I confess that when a friend who was downsizing his book collection gave me a copy of The Hart Brand, I’d never heard of author Johnny D. Boggs even though he’s prolific, viewed by many as the best westerns genre author in the business, and the winner of multiple Spur Awards.

I enjoyed the yarn.

We’re talking about a western for readers who are serious about westerns set in the days of Pat Garrett and the 1890s New Mexico Territory. Greenhorn Caleb Hart, whose father runs a mercantile in Missouri, heads west at 14 to work on his uncle’s ranch and send his paychecks back home to help support the family.

The book’s style and tone remind me of western novels of an earlier era and, for a story about a huge ranch, a hard-as-nails uncle Frank, cattle rustlers, strained family relationships, and frontier justice, the writing is perfect.

The “Booklist” review said, “Boggs writes with a drawling assurance, maintaining a keen eye for the details of life on the range. This is a fine western story about family ties and loyalty, set among cowboys rather than gunslingers, but with plenty enough action to satisfy.”

I don’t plan to go back to reading westerns, but this novel was an interesting change of pace. In a review, I would probably give it four stars. The writing is good enough for five stars but the story, in one form or another, has been told a thousand times. Nonetheless, a fun book. If you’re a fan of the genre, you’ll probably enjoy it.

Some books immerse readers into other worlds. This is one of them. Welcome to a New Mexico barrio where love and murder, and ghosts and the living become tangled up in a conscious landscape.

Georgia author Melanie Sumner (“How to Write a Novel,” “The School of Beauty and Charm,” and “Polite Society”) found her inspiration for the novel while living in New Mexico. She researched serial killers for a model for the protagonist for The Ghost of Milagro Creek (Algonquin, 2010) and struck out. Remembering the advice of her creative writing instructor, she realized serial killers are heartless and her protagonist very much needed a heart.

Mister does have a heart and it will make you cry.

“The story of Ignacia Vigil Romero, a full Jacarilla Apache, and the two boys, Mister and Tomás, she raised to adulthood unfolds in a barrio of Taos, New Mexico—a mixed community of Native Americans, Hispanics, and whites. Now deceased, Ignacia, a curandera—a medicine woman, though some say a witch—begins this tale of star-crossed lovers.

“Mister and Tomás, best friends until their late teens, both fall for Rocky, a gringa of some mystery, a girl Tomás takes for himself. But in a moment of despair, a pledge between the young men leads to murder. When Ignacia falls silent, police reports, witness statements, and caseworker interviews draw an electrifying portrait of a troubled community and of the vulnerable players in this mounting tragedy. Set in a terrain that becomes a character in its own right, The Ghost of Milagro Creek brilliantly illuminates this hidden corner of American society.”

Reviewer’s Comment: “[Ghost of Milagro Creek] is a little miracle for the way it bridges and leads and leaps, the way it frustrates and calms and punishes the reader who willingly goes willingly over these stepping stones…I found this novel worth my time, and so feel it will be worth yours, especially if you have an interest in New Mexico, in American Indian cosmology, in narrative structure and approaches, in good storytelling.” – The Rumpus

Beginning of Chapter One: “When I passed away, some people swore that Andre Pettit whould refused me a proper Christian burial. Only in Taos, Mexico, they said, would you hold a wake for a witch. In the barrio at the edge of town, my neighbors called ne Abuela, which means grandmother, but behind my back, their tongues snapped like flags in the wind.”

Malcolm R. Campbell is the author of “Conjure Woman’s Cat.”