When I was in junior high school, I saw an ad in one of Mother’s women’s magazines for Kotex and was curious why ads for sanitary napkins always showed young women out playing sports instead of sitting around the dinner table.

Mother was washing pans in the sink when I walked into the kitchen and said, “Mom, why would anybody ever buy an unsanitary napkin?” She dropped the pan, turned around as white as a ghost and shouted “What?” 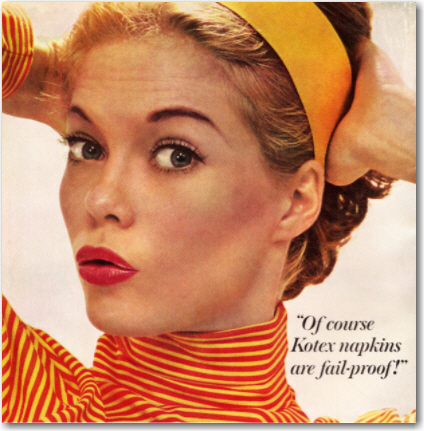 “I saw a Kotex ad for sanitary napkins and wondered if they thought other brands were unsanitary.”

“These are special napkins for women,” she said.

“Is that what y’all use when you go to a tea or have cakes while playing bridge?”

Mom was swaying a bit, possibly remembering it was just a week earlier when I asked her what the word “shit” meant. I learned that she apparently didn’t know but that it was a curse word we didn’t use in our family.

“They’re for rich people, then?”

“Does grandma use them?”

“Listen, under no circumstances are you to ask your grandmother about sanitary napkins,” she snapped.

“So, saying sanitary napkin is sort of like saying “shit”?

“If you treat the words that way, I will be eternally grateful. Suffice it say, sanitary napkins are especially packaged like Band-Aids so that folks will know they’re germ free.”

“The ad said they’re fail proof. Is that what you need if you’re really messy and keep spilling gravy on the table cloth?”

Mother sat down and put her head in her hands, inadvertently putting her elbows in a spot of grease that hadn’t been wiped off the table yet.

“Now, look what I’ve done to my best blouse.”

“If there are any Kotex in the pantry, I can bring you one and we’ll see just how good they are.”

“No, but thanks for asking,” she said with an unexpected trace of a smile. “Now go do your homework and don’t use the words ‘sanitary napkin” in front of your father or brothers.”

“It’s like shit, right, but a more powerful curse?”

“Someday you’ll be a father and when one of your sons asks you what the words ‘sanitary napkin’ mean, I hope you’ll remember this conversation and what you put me through.”

“I will, Mom,” I said, realizing that I felt less informed after asking the question.