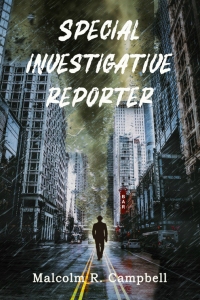 The Kindle edition of Special Investigative Reporter, my recently released satire is on sale today on Amazon for 99₵.

In this satirical and somewhat insane lament about the fall of traditional journalism into an abyss of news without facts, Special Investigative Reporter Jock Stewart specializes in tracking down Junction City’s inept and corrupt movers and shakers for his newspaper The Star-Gazer.

Since Stewart is not a team player, he doesn’t trust anyone, especially colleagues and news sources. Stewart, who became a reporter back in the days when real newsmen were supposed to smoke and drink themselves to death while fighting to get the scoop before their competition sobered up, isn’t about to change.

Stewart’s girlfriend leaves him, the mayor’s racehorse is stolen, people are having sex in all the wrong places (whatever that means), and townspeople have fallen into the habit of sneaking around and lying to reporters and cops. Sure, everyone lies to the cops, but reporters expect gospel truths or else. Stewart may get himself killed doing what he was taught to do in journalism school, but that’s all in a day’s work.

Pithy Quotes from the Novel

“I like a man with a cocked weapon in his trousers.” – Monique Starnes

“Democracy demands that we celebrate the election process at one ball after another. Just think, in some countries, the winners aren’t allowed to have any balls.” – Monique Starnes

“Now Jock, that’s just flat right as rain. But tell the people, especially those in my district, I’m here to serve. No sacrifice is too small that it can’t be ignored. You tell them.” – Councilman Billy Purvis

“Lucinda came in this morning dressed to the nines even though it was only 8:30.” – Coral Snake Smith

“If you can’t bail out with a box of money and perks leaving the little guys to fend for themselves (poor bastards), what’s the point of being a corporate CEO?” – Marcus Cash

“You know, Eddie, it’s a sin to kill a Mockingbird, but the law doesn’t prohibit me from clipping its wings.” – Marta Smith

The meatloaf was surprisingly lousy. It was the kind of meatloaf Aunt Edna fixed Jock when he was an innocent kid on or about the time when she was losing track of things such as who he actually was and what ingredients belonged in the food. – Jock’s opinion.

While the novels will continue to be available separately, those who plan to read all of them in e-book form will save by purchasing the three-in-one trilogy.

Florida Folk Magic Stories is also available at the following other online resellers. The cover looks different on these sites but the text inside is the same.

The new edition will soon be available for libraries that lend e-books.