Can we best honor our veterans by getting a price cut on a bottle of Viagra or a quart of fresh whitewash?

I have mixed feelings about this. 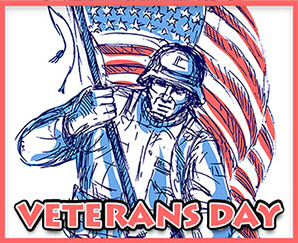 According to Newsweek, “Black Friday may be the most well-known day to find great sales, but Veterans Day also brings major discounts and promotions.”   The magazine’s feature article lists major stores and sales in case you can’t find them yourself.

While Memorial Day sales and hi-jinks are more out of line with the sacred quiet of the day that those who died deserve, I have often thought that veterans and their memories of moments nobody else dares imagine are the true casualties of war. As such, they deserve more respect than a trip to the store to get a sweet deal.

I’m a veteran and a conscientious objector, so I’ve seen the clouds of the war issue from both sides. Since my pacifism is based on my religious beliefs, it would be presumptuous of me to advocate pacifism for men and women with different religious beliefs.

I believe as mystic Ralph M. Lewis believes: “Peace manifests externally but begins internally–that is, in the thinking, idealism, and mental discipline of each individual. Peace must begin with the individual and work outward.”

Yet, I support our troops because they sacrifice their sanity and their lives to do what they believe is right on behalf of our country. I don’t support the politicians who lead the country into meaningless wars. But those who fight in those wars, have my admiration and gratitude.

I don’t propose that we spend Veterans Day in a church or with many hours of mediation in front of a candle in the sacred center of our homes. If that helps you, then it is good. It doesn’t help me. But looking for sales doesn’t help me either. In fact, I think it’s an insult to veterans. Nonetheless, I can’t fault anyone who loves a sale any more than I can fault a veteran for fighting a war that I think is a stain on the world’s psyche. Perhaps there are more gods out there than we can shake a stick at, so truth be told, there are numerous ways of seeing the issues that bring me mixed feelings on this day.

What I want to do on Veterans Day is this: the same thing I would do on any other day. That is to say, I appreciate the freedom and safety veterans have helped us achieve and maintain. So, I will fix dinner, read a book, work on my novels, watch some television, play with my cats, and remain in awe of a wife who loves me in spite of my faults. I don’t have any mixed feelings about that kind of holiday “celebration.”