Disclaimer: The devil didn’t make me write this post.

Disclaimer: If anything bad happens while you’re using these writing prompts, you’re on your own because I don’t warrant that they are safe or any damn good at all, and further that they’re displayed here merely as curiosities.

As you might have noticed, there’s been a fair amount of political talk going around this year.

A lot of it illustrates my hypothesis that politicians–especially career politicians who don’t believe in term limits–are people who were consigned to hell who’ve been let out on parole because hell is full and/or because Satan thinks they’ve been rehabilitated and/or because having them running loose in the temporal world is the result of another one those “learning experiences” both God and the Devil want humanity to wallow through, albeit for different reasons.

Looking at the results of this learning experience so far, it appears we have failed. No, this isn’t a comment about who won and lost, but about how we’ve played the game.

Badly, I would suggest.

Will Rogers, who wasn’t a fan of government, once said, “I don’t make jokes. I just watch the government and report the facts.” Assuming he’s in a grave, he would be turning over in it now because the facts no longer matter. They’re not even funny.

We live in a world of fake news and selective-reporting-by-corporate agenda. People are arguing on Facebook, citing “the fake news I believe” vs. “the fake news you believe.” The gist of this approach is that people listen to “news” reports and editorials based on the fake news that best coincides with their view of the world as they think it ought to be. Any sane person steps into these debates at their peril usually to be slammed by people on both sides of the aisle as an ignorant troll.

So where are we now? Some say we’re in a hell of a mess. It’s so bad that most of our comedians have gone from being funny to being strident. It’s so bad that 75% of people’s prayers these days are that the people believing the wrong set of lies will perish in a flood or volcano. It’s so bad that hell itself looks like a paradise.

Some say, if you can’t beat them, join them. That sounds unseemly, like a sell out, like the fastest way to hell in a hand basket. Some say, “sue the bastards,”  though the trouble is, we can’t seem to agree on which bastards need to be sued. Some say, “make love, not war,” and while that’s not a bad idea, it probably won’t send the nasty politicians back where they came from. Others are running around like chickens with their heads cut off and, as we all know, that doesn’t accomplish a whole hell of a lot.

My advice–which isn’t worth a damn–is to keep silent until the extremists on both sides of the political spectrum run out out of ammo. That may take a while, but better safe than dead. 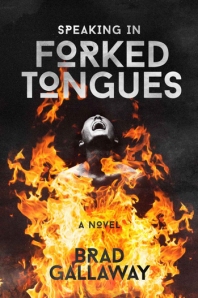 Brad Gallaway’s dark fantasy/horror novel Speaking in Forked Tongues is inventive, delightfully written tale about a young man who calls demons for a living. When folks can’t solve their earthly problems, they contact Helping Hands agency who sends out a caller with an underworld solution. Callers who have been to hell and back multiple times are the best in the business.

While the publisher’s description claims that protagonist “Bren Barran is a normal guy in most ways,” one might ask whether a young man who was adopted by demons, who grew up in hell, and who brings clients and demons together to fix what nobody else can fix can possibly be normal in most ways. Yet, Gallaway makes Barran seem normal, in spite of a predilection for dark, self-deprecating humor.

Unlike poor Faust who sold all of his soul for help from hell, Barran’s clients usually part with a mere sliver, insuring that the demon on call gets what he wants, Barran’s boss Nareth gets what she wants (a cut of the action), the callers get paid and that the happy clients have enough soul left to bring in repeat business.

What could possibly go wrong?

Even though hell is a well-run, ably governed and a relatively safe place quite unlike what we’ve all heard, there’s room there for jealousy and discord. Truth be told, Barran doesn’t think demonkind is any worse than humankind when it comes to bad traits except for the fact demons are physically larger, have claws, and know dangerous (and harmful) spells. So, when Helping Hand’s callers start disappearing and when Barran starts getting attacked on the street, it isn’t long before (seemingly) all hell breaks lose.

There’s a bit of expected gore in this book and a wonderfully tangled plot for Barran to navigate as he tries to solve his agency’s demon problem while staying alive. Naturally, Mom and Dad want to help, but according to the rules, they also have to be paid.  The bad guys in this story are really bad and Gallaway makes them seem uncomfortably plausible while leading readers to an ending they won’t see coming.

On a minor note, a warning to parents: The novel’s listing on Amazon claiming that the book is suitable for ages 1 to 17 is either an error or a devilish promotional trick. Teens and adults of all ages can probably stand the heat, while enjoying the trip.