A note from the sponsor (yep, still me).

I wrote my first novel (The Sun Singer) in 1980, found an agent who liked it, left the agent when she said a few weeks later that I’d have to wait until she finished working on Jean Auel’s The Clan of the Cave Bear, and then couldn’t find another agent for it and finally self-published it in in 2004. Maybe I shouldn’t have left that agent, but if you know Jean Auel’s work, you know it’s been highly successful, so I’m not sure the agent would have ever finished working on it.  (I taught Auel a lesson: I never read any of her books.)

The story I told in The Sun Singer had been messing with my dreams since I was in elementary school. Then, in 1963 when I worked as a seasonal hotel employee at Glacier National Park, I found the perfect place for my prospective contemporary fantasy. 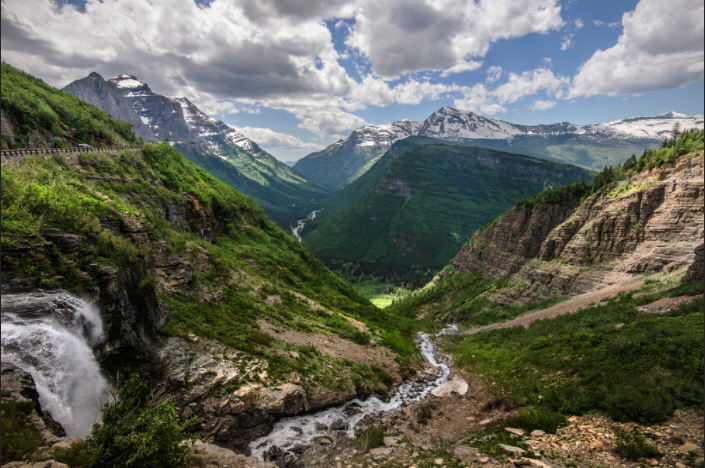 I don’t really believe n destiny, not as an outside force seeking to run my life. But the persistent dreams about this young man named Robert Adams wouldn’t go away until I wrote the book. This endless prompting made me wonder if I was wrong about destiny or perhaps that destiny came from within and became something we were bound and determined to do.

Glacier National Park quickly became my favorite place on the planet. It still is. So my dreams went from being precognitive about all manner of things to a new prescient focus about the mountains, lakes, and trails in the Montana park. I think I wrote the book in self-defense. Knowing things in advance is a bit awkward unless you want to open a fortune teller booth at the circus. I didn’t, mainly because I don’t believe the future is engraved in stone.

Like the novels in my Florida Folk Magic Series, The Sun Singer was also a joy to write, partly because (as a Florida boy) I was so stunned by the beauty of the mountains, partly because the story was fun, and partly because the writing of it was getting all those dream-state glimpses of the future off my back–or, at least, out of sight and out of mind.

After it came out and surprised me by being a book of the year finalist, publishers started asking me about it. But they were slow in deciding what they wanted to do because they specialized in nonfiction. Yes, I finally found a publisher and the book did fine until many of that publisher’s authors began seeing things we didn’t like. So, like the agent many years ago, I left that publisher and the book is now self-published again.

What a strange road writers often follow. The road began when I saw the famous Sun Singer statue at Allerton Park in central Illinois, became a dream journey, and ended up with the published novel. Now I’m a senior citizen looking back on it all and wondering if on this path the truth is stranger than the fiction.