When I used to read Tarot cards and the I Ching, people were simultaneously curious about the future and nervous about hearing what it might be. A person’s feelings about the results of fortune telling were based to a great extent on what exactly they thought the future was/is.

Some people believe in fate, a concrete future stemming from the workings of the cosmos while others believe in destiny stemming from an individual’s probable decisions leading toward a specific or general situation or set of circumstances. I don’t believe in either or that the future is engraved in stone in any way.

The best point of view I heard about a psychic reading is an old one, one that proposes that a reader is standing on the roof of a tall building viewing multiple city streets that are, of course, not totally visible to people or cars on those streets. S/he sees two cars approaching an intersection without traffic signals. They’re moving a the same speed. One prediction might be that there will be a collision. Yet that prediction is not fixed because either car may change its speed, pull into a parking garage, or stop at a store. The prediction, then, is merely a possibility based on current conditions.

Some say that the future is part of (or all of) God’s plan and that He/She moves in mysterious ways. The Presbyterians used to believe in predestination about not only the future in this world but whether or not we’d end up in heaven or hell in the world to come. The outcome was considered fixed. I was a Presbyterian in my K-12 years and thought that belief was silly. Later, Kabalistic studies convinced me there was nothing mysterious about the workings of the Creator.

Some say all time is now. Everything thing that will happen is happening at this moment in one venue or another. We just can’t observe all the venues with our physical senses. Lena, the cat in my Florida Folk Magic Series, has this view. 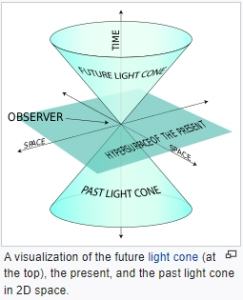 Some quantum physicists say that everything that can happen, will happen in one universe or another. This tends to be my view because I believe we create our own reality. That is to say, the future is what we are creating unconsciously (usually). A lot of people subscribe to this idea in a speculative sense but deny it when it’s applied to real conditions. They don’t want to believe that if they’re in one of the two cars the psychic sees from the roof of the tall building, they have chosen to be in the collision if there is one.

That notion is counter-intuitive and/or horrifying when you get down to specifics and so people think it’s easier to say that God, fate, destiny, luck, or randomness determines the future rather than to say one has any responsibility for it. Personally, I want the responsibility and find that much more palatable than disagreeing with Einstein and believing that God does play dice with the universe. You won’t be surprised to hear that I never express this belief in public after a tragedy because that would shake up the belief system of another person who is suffering a loss.

In fact, most of the time, it’s just better for me to keep my mouth shut except in “what-if?” posts like this one where many readers will just assume I got into the locoweed again. 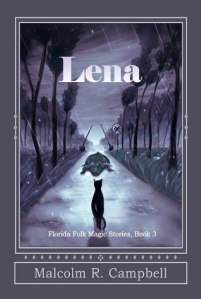 Malcolm R. Campbell is the author of the Florida Folk Magic Series, including the novel “Lena.”

So far this year, my posts have had 15,506 views, the most popular post being an old one Barebones Structure of a Fairy Tale with 2,086 views and my navy slang post Heave out and Trice Up with 923 views. It’s also an old post.

For a while, my post about the White House Boys, the survivors from Florida’s nasty Dozier School and its transgressions received many views. Those began to fade as the story about the search for graves on school property fell out of the daily news. I thought some of those readers might find yesterday’s post about the school and Colson Whitehead’s bestselling novel The Nickel Boys ( Colson Whitehead’s ‘The Nickel Boys’ Takes Kirkus Prize for Fiction) that was based on the school. So far, only three views. That surprises me.

After all these years posting on this blog, which began on Blogger and was moved to WordPress in 2008, you’d think I’d know what I was doing. But I don’t. The posts I think nobody will notice get lots of views and the posts I think everyone will notice are slim to none in the popularity category. In “real life,” I don’t believe in fate, much less in the fates of Greek mythology (Clotho, Lachesis, and Atropos, et. al.). Yet, sometimes I wonder.

Are three ladies truly spinning thread that represents our lives, measuring it, and then snipping it off? Gosh, I hope not. Yet, “fate” is a popular notion even in our age of science and technology about things that happen for no discernible reason. Others are more comfortable saying “God moves in mysterious ways.” (I don’t mean to imply that God reads my blog. <g>)

Why anything happens when it happens is usually tangled up in so many variables that understanding all but the most simplistic parts of it are beyond human ken. We might say that a person was injured in a car accident because somebody ran a stop sign. The police report usually covers that part. What they don’t cover is why the two cars involved happened to arrive at that intersection at the same moment. There are lots of theories about what “Why” but most of them don’t sync up with our consensual logic about the world so all we can do is ponder them.

Many newsletters these days have within them the code (often within a pixel) which the sender can use to see who reads them. If you don’t read them for a while, sooner or later you’ll get a message that asks if you will want the newsletter. Usually, I do. But I have to logical reasons for why I read it some days and skip it on other days. Sure, there are obvious reasons: I was sick, I was out of town, &c. But then there are the times when my brain is shorted out already and I don’t have the patience for reading something I normally like.

I don’t think that’s fate, but I can’t prove it. I’m happy that so many of you keep coming back to this rather eccentric blog and are reading so many posts. So thank you for being fated to read what you read <g>.

Excerpt from Widely Scattered Ghosts: “On the band bus ride home, the stunning, first chair flute player Melinda Wallace sat beside him. She had no clue how he felt about her, not that he’d said anything. The empty aisle seat next to a clarinet was, he guessed, preferable to sitting in the back with the band’s borderline criminal element of raucous drums and tarnished brass. Melinda smelled like wildflowers and her unruly light brown hair smelled like the wind. When the band played ‘The Stars and Stripes’ Forever’ in concert and Melinda stood up into the light for her piccolo solo—the sweetest banshee cries the world has ever known—her blue eyes were frozen into ice for thirty-two measures of leaps and trills, while her hair could not be restrained.” – The Lady of the Blue Hour in “Widely Scattered Ghosts”