“The idea that time is an illusion is an old one, predating any Times Square ball drop or champagne celebrations. It reaches back to the days of Heraclitus and Parmenides, pre-Socratic thinkers who are staples of introductory philosophy courses. Heraclitus argued that the primary feature of the universe is that it is always changing. Parmenides, foreshadowing Einstein, countered by suggesting that there was no such thing as change. Put into modern language, Parmenides believed the universe is the set of all moments at once. The entire history of the universe simply is.”

– Smithsonian in “What Does ‘Happy New Year’ Really Mean? 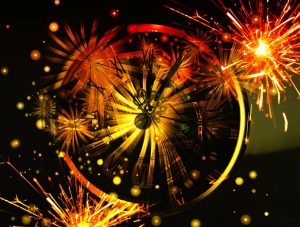 It remains fashionable to kiss somebody, have a drink and say “Happy New Year” wherever (and possibly whenever) we may be when midnight occurs in our time zone.

We don’t concerns ourselves unless we’re really drunk or excessively sober and alone at that magic moment that people in some parts on the word said “Happy New Year” hours ago or that other people have yet to say it.

As a writer of fantasy and magical realism, I believe it’s my duty to say yes, Mr. Einstein, time does not exist. The appearance of time is convenient. But beyond that appearance everything is simply now.

So, you see that as long as I claim time is an illusion, I don’t have to get drunk at midnight on New Year’s Eve or, worse yet, look at all the things I didn’t get around to this “past” year and resolve with much fanfare to do them “this coming” year.

I realize that one can use the “time is an illusion” philosophy as an excuse for variously not planning ahead or for forgetting the “past,” much less showing up anywhere on time. Likewise, one doesn’t have to believe that time flies, that the “past” is over and done with or that there’s any reason to plan for the “future.”

Whichever side of the time debate we choose, we’ll always have all the rationalizations we need for doing whatever we like. That’s the beauty of these questions. They remain cryptic and mysterious and (possibly) filled with doubletalk. Maybe we really are, as the movie said, going back to the future. Maybe people who are said to be living in the past really are very forward-looking folks. Nonetheless, the “eternal now” remains illusive.

That said, best wishes for a Happy New Year even though such a thing might already be past history.

Malcolm R. Campbell is the author of contemporary fantasy novels and paranormal short stories which may or may not exist in your time zone depending your belief system.