“The students are at the start of their creative lives, and I remember well what those years felt like — when you think you know what art requires, and then the realization comes that you must go deeper and deeper still (if you’re serious at all) into the unknowable, uncomfortable, vulnerable place where the root of creativity lies…which is to say, you must go deeper and deeper into yourself, which can be daunting indeed. Even now, after all these years, I still have days of sharp (or anxious, or befuddled) resistance to this act of deep surrendering…but the joy of age is that I know my own process now, the daily habits, practices, and mindset that will carry me past each block and obstacle and back into the work.” Terry Windling in “When the Magic is working” from Myth And Moor.

This 2014 post from Windling’s blog shows you why I like her work and why I return to her Typepad blog so often for fresh inspiration. I might also note that I read Theoroda Goss’ novels and blogs for the same reason. And so, too the former Endicott studio journal, featuring the work of Windling, Jane Yolen, Midori Snyder, and others. To read their work is to re-discover anew a deep well hidden in a sacred copse where magic lives in the deep water. Drink, and you’re transformed and living within, as Windling wrote, that deep and “vulnerable place where the root of creativity lies.“

Life, as philosophers and comedians say, “ain’t easy.” The slings and arrows of daily life wound us again and again until the magic within our souls just about drains away. So we return to the well and drink again.

Every artist/writer/painter finds his/her own muse and his/her hidden well where s/he drinks and is refreshed. It might be an author (or group of authors) and their novels, essays, and poems; it might be the witch who lives down the street, or perhaps the “older generation” in one’s own family. We all must find the source of our magic and what makes it flow through our veins like holy fire. 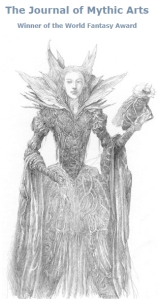 You may not have anything in common with those who inspire you except for the inspiration they provide. None of the people associated with the blogs and studios listed above know me. We move in different circles. To great extent, they are interested in faerie and mythic worlds while I’m interested in contemporary fantasy and magical realism.

In time, the magic will live within you and you’ll find that you no longer have to return to that well (unless you’re sightseeing) to start your work. You will know what to see in your mind’s eye or how to adjust your breathing or your office or your desk because you will have done it so often that it will become, not second nature, but first nature. First nature for your art perhaps; or first nature for the way you live your life. The second approach works better for me: what I write on the page comes from how I live and what I believe rather than as a prop for making art.

I used to listen to music when I wrote. For one book it was “Nirvana Road.” For Another book, it was “Beneath The Raven Moon.” Music, I find, becomes associated with the work and with the magic behind it. Playing the music is like turning the ignition key in a car–or, these days, like holding down the brake while pushing the “start” button. Then things are purring at the right level and plain of existence, the writing flows because the magic is working.

I started thinking about secrets after reading author Dora Goss’ post about keeping secrets. Looking at the relationships between men and women, she writes, “It seems to me that there are women men keep secrets from, and women men tell secrets to. Most women, at different points in their lives, occupy both of these positions: secrets are kept from them, and they are told secrets.”

In “real life,” I don’t like being told secrets because those who are asked to help hide one thing or another are usually part of the collateral damage when the truth comes out. As a writer, though, I love secrets because every novel begins with the unsaid premise that there are secrets within that the reader must uncover while reading the book.

I liked the imagery in Rowling’s Harry Potter and the Chamber of Secrets. For one thing–like so many novels about extraordinary youths–here we had within Hogwarts School a secret room that all the master wizards of the realm could not (or did not) find, open up, and neutralize. To enjoy the story, the reader has to play along with the ruse that wizards many times more powerful and knowledgeable than young Harry Potter really had no clue about the chamber other than as an old myth about the castle.

Putting a Christian spin on the meaning of the chamber of secrets, John Granger sees Harry Potter as “everyman” the chamber as the world, the snake in the chamber as sin, the evil Lord Voldemort as Satan, etc. One can make a strong case for this interpretation in line with many religions and myths.

I tend to see a chamber of secrets as man’s unconscious mind and that like the powerful wizard teachers at Hogwarts, most of us see that part of the psyche as either a myth or–if real–a place too dangerous to visit. Using this view, a writer looks at his or her protagonist as an individual, badly flawed or otherwise, who doesn’t wholly know himself or herself, much less all of his/her capabilities.

When I start writing a story, my aim is always to conceal as much as possible from the reader without appearing to be concealing anything. I drop hints, many of which will only make sense later when the secrets home out. Like stage magicians, writers are presenting for your entertainment an illusion that obscures the mechanics of what’s really going on in front of your face.

A good magician seldom reveals how assistants disappear out of boxes, how rabbits appear in empty hats or how playing cards disappear into oranges, locked safes or the pockets of people sitting out in the audience. Of course, a great book has a climax to it and that’s when the reader finds out everything (maybe) that was happening that wasn’t apparent up to that point.

With the discovery, there is often surprise, but if the author has done his or her job well, there’s also a”but of course” moment of recognition. Later, the reviewers and critics will argue about how the author kept the secrets for so many pages and what those secrets really mean. Once all the reviews, articles and books have been written about the story, everyone will think they know everything.

But they won’t because authors never tell everything not even to the women men tell their secrets to.

Malcolm R. Campbell is the author of the Garden of Heaven Trilogy of fantasy novels: “The Seeker,” “The Sailor” and “The Betrayed.”