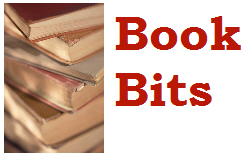 At my age, a vigorous, bone-crushing, muscle twisting workout comes from spending several hours on the riding mower. While recuperating, I found a few links you might enjoy. Or you might not. Long-time readers of this blog know that ever since high school, I’ve been fascinated by writings about Carl Jung, alchemy, and quantum mechanics (the many worlds interpretation), so I’m happy to see a review of a very readable book that has uncovered multiple levels and/or universes of meaning (Item 2) since we’re all entangled one way or another.

Have fun exploring the books and authors links this week.