“The United States Department of State calls child marriage “gender-based violence.”  The United States Agency for International Development calls it “a human rights abuse.” Across the board, our government condemns child marriage worldwide and provides funding for programs that fight this abuse overseas. But the U.S. government makes exceptions when it comes to children living in the U.S. 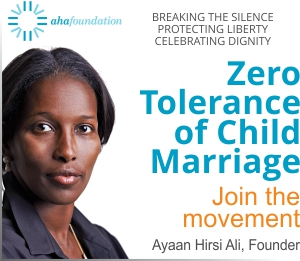 “The state laws within the United States do not align with our own internationally proposed standards of how other countries should treat their children. Forty-eight states are failing to protect girls from child marriage. They have dangerous loopholes and exceptions that allow for marriage, some even have no minimum age for marriage. Shockingly, it is legal for a U.S. citizen child to sponsor a visa for a foreign-born spouse or fiancé(e).”

As a strong supporter of the AHA Foundation, my sense of the American Public’s attitude about religious or culturally based violence against women is that it occurs in third world countries. Unfortunately, child marriages, among other travesties, also occur in the U.S.

Like Native American women who are swept into sex trafficking, women from third world countries who legally come to the United States are often swept into unwanted and often-abusive child marriages. I agree with the AHA’s assertion that “Putting in place a minimum age of 18 to sponsor a spousal/fiancé(e) visa is a simple, common-sense solution that would protect U.S. children from the very real threats associated with forced and child marriage.”

Today’s volatile political climate has lent itself to poetry, essays, articles, and novels as writers find themselves unable to keep silent. Good for them. I would like to see more novels in defense of women that explore child marriages in a country where the very concept is solidly against such practices.