Most authors who use mythic elements in their work are familiar with the hero’s journey structure introduced by Joseph Campbell in the 1940s. Campbell’s sequence of steps in a journey from beginning to end has been criticized by some for missing important aspects of themes, contexts and cultures, and over-used by others to explain the plots of all movies and plays. Nonetheless, it’s a handy structure. See updates at the end of this post. 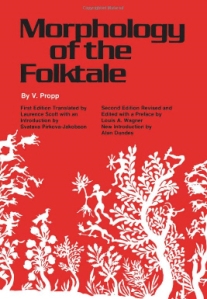 Authors who want to write fairy tales have a similar sequence worthy of study in Vladimir Propp’s structuralist approach to fairy tales that suggests all tales follow a similar sequence even though each tale doesn’t use all of the thirty-one steps. In addition, Propp says the major characters in fairy tales usually include a hero, false hero, magical helper, dispatcher, villain and donor.

Like the hero in the hero’s journey schema, the hero in a fairy tale is sent out by a dispatcher (wise person, king, friend) who knows of the hero’s needs and sends him/her out to seek a prize, such as the princess/prince, and is assisted by a donor and magical helpers, then fights against by the villain and a false hero (who wants the prize).

Dmitry Olshansky, writing in the “Toronto Slavic Quarterly,” says that “in his research Propp separated variable and constant elements in different fairy-tales, seeking a wonderful uniformity in the labyrinth of multiplicity. (Propp, , Morphology of the Folktale). In other words, he was less interested in the matter than in the structure of the narrative, trying to establish a stable scenario in the relation between parts and whole in a totality of tales.”

Catherine Orenstein, in Little Red Riding Hood Uncloaked, calls these elements structural building blocks. These elements are looked at by Propp in chronological order rather than studying the patterns underlying the tale. Propp looks at tales outside the context of culture and time period, a problem that also confronts those who use the hero’s journey sequence too much like a formula.

You can find Propp’s sequence of steps in multiple places online including Wikipedia and in a nice post by Jerry Everard. However, here is the basic sequence. It’s worth a look, I think, if you’re studying fairy tales with a thought of using the genre yourself:

It’s fun comparing the steps in this sequence with popular fairy tales. This is easy on the SurLaLune site which has annotated versions of many old favorites.

If you’ve read a lot of fairy tales, you’ve probably already internalized the structure. If not, Propp will prop you up.

Malcolm R. Campbell is the author of the Florida Folk Magic Series: “Conjure Woman’s Cat,” “Eulalie and Washerwoman,” and “Lena. “

How could Red Riding Hood Have been so very good And still keep the wolf from the door? – from A. P. Randolph’s 1926 hit song

Midnight, the clock strikes. It is Christmas Day, the werewolves’ birthday; the door of the solstice stands wide open; let them all sink through. See! Sweet and sound she sleeps in granny’s bed, between the paws of the tender wolf. – from Angela Carter’s retelling of the fairy tale in The Company of Wolves.

Little Red Riding Hood
Went walking through a wood.
She met a wolf and stopped to chat.
Don’t ask what happened after that!
– Armand T. Ringer (Martin Gardner) in Are Universes Thicker Than Blackberries?: Discourses on Gödel, Magic Hexagrams, Little Red Riding Hood, and Other Mathematical and Pseudoscientific Topics

I heard the Grimm’s 1812 version first, probably because my parents liked the happy ending in which LRRH is rescued by the hunter. The moral of this version was don’t stray from the path. Charles Perrault’s 1695 version, which is grimmer than the Grimm’s version, admonishes children not to talk to strangers.

Like many children, I probably thought the story was just another example of a bad day in the woods and/or that this is just the sort of thing that happens to kids who don’t listen to their parents about strangers and paths. The prospective bawdy messages behind the story were lost on me in the days when I listened to bedtime stories.

Adults, from psychologists to folklorists to parents, have variously found deeper meanings in the story or missed the point altogether.  In Little Red Riding Hood Uncloaked: Sex, Morality, and the Evolution of a Fairy Tale, Catherine Orenstein notes in the introduction that two California school districts banned the book in the 1990s because of an illustration showing a bottle of wine in LRRH’s basket.

“The story line of Red disrobing and climbing into bed with the wolf passed muster,” writes Orenstein. “But the wine, they said, might be said as condoning the use of alcohol.”

As I grew older, questions came to mind about the story. They were, in fact, very similar to those of Dr. Eric Berne’s  (Games People Play, What do you say after you say hello?) questions of an objective observer: “What kind of a mother sends a little girl into a forest where there are wolves? Why didn’t her mother do it herself, or go along with LRRH? If grandmother was so helpless, why did mother leave her all by herself in a hut far away?”

These questions sound similar to those a police officer might ask. And, in real-life events, they make sense.

Berne further speculates that maybe mom wanted to get rid of the kid and hoped for the worst out in the woods. This would would allow mom to play the “Ain’t it Awful” game. Berne was, as always, delightfully cynical and LRRH certainly provided food for thought for those studying transactional analysis, psychological games and scripts. But, rather than uncovering what the fairy tale means, the objective observer approach primarily suggests there’s more in the story than initially meets the ear.

I like searching for potential meanings and versions. The LRRH story came out of an oral tradition long before Perrault’s version was published. Orenstein writes that it began as a tale for adults, has changed over time, and that various versions include bits and pieces of the fairy tale’s earlier incarnations.

In his 1983 book  The Trials and Tribulations of Little Red Riding Hood, Jack Zipes found at least 147 versions of the story. Of these, Perrault’s version wasn’t the most morbid. Since Zipe’s book came out, more versions have been added, including  Philip Pullman’s 2012 rendition in Fairy Tales from the Brothers Grimm: A New English Version. (You can see Marina Warner’s review of Pullman’s approach in Fairy tales licked clean.)

Psychologists have had a field day with LRRH and have supplied their views of the fairy tale’s meaning in books, including Erich Fromm’s 1951 Forgotten Language: An Introduction to the Understanding of Dreams, Fairy Tales, and Myths and Bruno Bettelheim’s 1976 The Uses of Enchantment: The Meaning and Importance of Fairy Tales.

Fromm believes LRRH is experiencing unconscious sexual impulses and wants to be seduced by the wolf. Bettelheim says she’s in the nymphet stage of life and is less innocent than she seems. Other psychologists search fairy tales, including LRRH, and find them to be communicating eternal archetypes.

While I see the archetypes in the larger-than-life worlds of myths, I’m less sure about their importance in the domestic-related arena of fairy tales. In a way, the tales seem to relate more to the time, place and moral issues of their settings—like snapshots. In From the Beast to the Blonde, Marina Warner says that searches for a tale’s universal significance tend to overshadow the human behavior illustrated by the story.

“I began investigating the meanings of the tales themselves, but soon found that it was essential to look at the context in which they were told, at who was telling them, to whom, and why,” writes Warner.

Unfortunately, her beautiful book is out of print and that makes the treasure hunt of looking for meanings in fairy tales a little more trying. However, it’s still listed on Amazon along with third-party sellers.

So Where Are We Now?

Orenstein suggests that society has a vested interest in LRRH, “in the messages she wears, and those she covers up.” Little Red Riding Hood Uncloaked: Sex, Morality, and the Evolution of a Fairy Tale is, fortunately, still in print, and well worth including in a LRRH treasure hunt.

I also like Jane Yolen’s thoughts about the fairy tale from Touch Magic:

“Anthropologists have read it as a folk memory of old menstruation myths or sun/moon myths. Freudians point to it as a possible incest story, or a pregnancy fantasy. Marxists have seen it as the triumph of the proletariat over the evil capitalists who would lure them into a cozy relationship and then devour them. And moralists through the ages say it means simply: You women should not go to bed with strangers who may turn out to be ‘wolves.’ Who is right? They are all right. For as the writer writes about himself or herself, so the adult reader reads.”

Personally, I like the ambiguity of multiple versions, meanings, tellers and time periods.

The Path of Needles or Pins: Little Red Riding Hood by Terri Windling

Excerpt from The Company of Wolves by Angela Carter

Malcolm R. Campbell is the author of fantasy novels and short stories including “Emily’s Stories,” available on Kindle.