The sequel is a Thomas-Jacob Publishing release. 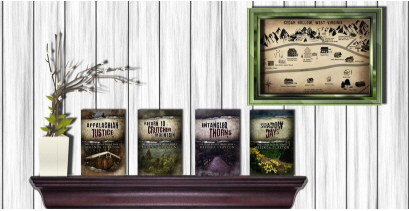 The meatloaf was surprisingly lousy. It was the kind of meatloaf Aunt Edna fixed Jock when he was an innocent kid on or about the time when she was losing track of things such as who he actually was and what ingredients belonged in the food.

Holly Palance has done a wonderful job narrating this final novel in the Florida Folk Magic series. For those of you who like listening to a story, Holly will draw you into this one and you just might find yourself listening to the book in one sitting.

When Police Chief Alton Gravely and Officer Carothers escalate the feud between “Torreya’s finest” and conjure woman Eulalie Jenkins by running her off the road into a North Florida swamp, the borrowed pickup truck is salvaged, but Eulalie is missing and presumed dead. Her cat, Lena, survives. Lena could provide an accurate account of the crime, but the county sheriff is unlikely to interview a pet. Lena doesn’t think Eulalie is dead, but the conjure woman’s family and friends don’t believe her.

Eulalie’s daughter, Adelaide, wants to stir things up, and the church deacon wants everyone to stay out of sight. There’s talk of an eyewitness, but either Adelaide made that up to worry the police or the witness is too scared to come forward.

When the feared black robes of the Klan attack the first-responder who believes the wreck might have been staged, Lena is the only one who can help him try to fight them off. After that, all hope seems lost, because if Eulalie is alive and finds her way back to Torreya, there are plenty of people waiting to kill her and make sure she stays dead.

Click on the cover to buy the book on Amazon. Click here to buy it directly from Audible.