Readers and writers often discuss whether or not they re-read books. While many of us have too many new books we want to read to spend much time re-reading old ones, the consensus is that there are usually a few comfort-food old books we enjoy multiple times.

I’ve re-read most of Isabel Allende’s books at least once, some of Pat Conroy’s bools several times, and an old Scot’s language trilogy A Scot’s Quair by Lewis Grassic Gibbon multiple times. Why? The reasons are mostly subjective, but usually include interesting characters, compelling plots, a fine use of language, and the likelihood of discovering something new in the story each time I go through it.

I very seldom re-read page-turner novels. They keep my attention the first time, but the plots are too linear and predictable to be interesting if I try to pick up these books a second time. Other books, many that are clever, highly inventive, and often humorous don’t seem to work for me on a second or third reading. Perhaps most of the excitement from the first reading fades away because it came from experiencing something very new, like hearing a great joke, that doesn’t work later on because I already know the punchline. 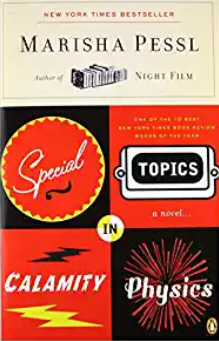 As a case in point, my favorite novel in 2006 was Marisha Pessl’s Special Topics in Calamity Physics.  It was well received by critics and became a bestseller. Out of fresh reading materials, I looked forward to reading it again last week. I was surprised to find myself skimming. However, I did read it to the end because I’d forgotten many of the details of a rather tangled plot.

The protagonist, Blue van Meer, is enrolled in an upscale high school for her senior year after spending the rest of her school years enrolled in one or more schools every year because her widowed father ended up with university teaching positions throughout the country. At St. Gallway School, she seemingly inadvertently comes under the wing of an eccentric film teacher and the snobbish clique of students who worship her.

The book, which mimics the syllabus of a high school or college course, is clever, inventive, philosophical, and an outstanding example of stories where nothing is what it seems to be. Blue’s erudite father is very philosophical and very opinionated about the values of the unwashed masses. While this was interesting the first time through the book, such passages became a big of a swamp the second time through. Likewise, Blue speculates about a lot of things and, while exciting when I first read the book, were a bit tedious the second time.

I still highly recommend the novel and believe that readers who enjoy something different and highly creative will have fun reading it. It failed to keep my attention the second time through because its unique approach tended–in my view–to keep it from being compelling when that unique approach was a journey I’d taken before.

I admit that my feelings about re-reading Special Topics in Calamity Physics are highly subjective and probably tell you more about me than they tell you about the book. Other readers would look at the list of books that I re-read and say they either couldn’t get through them once, much less twice. With movies, some of which I’ve watched multiple times, I often find that the ambiance of such films brings me back to them in spite of the fact I know how they end. Perhaps avid readers feel the same way about the books they read multiple times.

Some people tell me they’ve read all the books in the Harry Potter series multiple times. I’ve read them all, but have little interest in re-reading them even though I’ve seen some of the movies more than once (and enjoyably so). I recently read the Scot’s language translation of the first Harry Potter book Harry Potter and the Philosopher’s Stane and thoroughly enjoyed it because–for a person of Scots ancestry–it was fun reading it in Scots. Could I read it again? Probably not because I enjoyed seeing a story I already knew through the eyes of the Scots translator. It can only be new once.

Likewise, Pessl’s Special Topics in Calamity Physics can only be new once, and after that an novel based on a clever approach didn’t work for me as read-it-again-and-again comfort food.

My answer to this hastily thrown together set of questions is #5. When I read a great book the first time, I think, “I’ll remember all of this forever.” When I re-read it ten or twenty years later, I’m amazed at how much I’d forgotten.

Returning to a favorite book is like having a new conversation with an old friend. I don’t re-read books as often as literature professors because many of them read books again every time they teach them in a course. While some literary criticism is interesting, I seldom read it, even when it focuses on the books on my selves I like the best. I don’t like being skewed away from my impressions of a book over time by reading what others have said them.

My favorite room at Asheville, North Carolina’s Biltmore House is the library. My library wouldn’t look this good because I buy mostly paperbacks. They don’t wear as well or look as nice on shelves that climb all the way to the ceiling. As it turns out, some of my paperbacks are so old that the pages fall out when I read them. Suffice it to say “Perfect Binding” (the style used for most paperbacks) isn’t perfect. The glue deteriorates over time.

I doubt that any of my old books are worth a lot of money, so you won’t see my name attached to a newsworthy sale of a book at a famous auction house. In addition to the favorites I’ve owned for years, the most dear are those that were once owned by my parents or grandparents. They speak to other times and other places, but re-reading them occasionally is almost like a psychic experience because my imagination tells me what my relatives thought and felt when they once read the words I’m seeing years later.

Every time I re-read a book, I discover something new about the story or about me. Sometimes I remember where I was when I first read it. Sometimes I’m disappointed because I no longer like the story and I see that I’ve changed from the person I was when I thought it was the best thing I read “that year.” However, the books I turn to again and again are always a special pleasure because through luck or magic or the author’s skill, they have kept their excitement, sense and relevance.

Perhaps some of you have found some of the same things to be true whenever you took an old book off a shelf and enjoyed it again.

Malcolm R. Campbell is the author of “The Sun Singer,” “Sarabande,” “Jock Stewart and the Missing Sea of Fire,” “Conjure Woman’s Cat,” “Eulalie and Washerwoman,” “Mountain Song,” and “At Sea” in addition to numerous Kindle short stories.